“Everyone loves a royal romance,” Nicholas, the prince of Wales and Great Britain’s future king, tells his girlfriend, American Bex Porter, in The Royal We, a novel that imagines a life lived once one’s prince has come.

Millions of Americans watched the wedding of Charles and Diana, and millions were saddened by the less than happy ending of their royal not-really-a-love-story. Thirty years later, millions again tuned in to watch as their son, William, married commoner Kate Middleton. Would this match finally satisfy our romantic yearning for a true-life royal fairy tale? 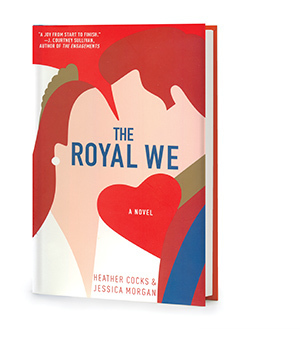 Perhaps it has. But since such grand events don’t happen often, Heather Cocks ’99 and Jessica Morgan fill the gap nicely with The Royal We. While clearly inspired by Will and Kate, with easily matched parallels — Bex has a twin named Lacey who loves attention; Nick has a ginger-haired brother named Fred who loves to party; Queen Eleanor has a flick of a wave, “like she [is] halfheartedly shooing a gnat” — this look of the pleasures and perils, blessings and burdens, and hopes and hurts of dating a prince offers much more than an fictional recount of that real-life pair.

The authors are also the creators of the Go Fug Yourself fashion blog and their witty take on a romance novel is chockfull of their trademark sly winks, including a wanna-be dress designer who apparently can’t sew a straight seam. And as Bex narrates her journey, sweeping us from an Oxford dormitory to country house parties, the royal box at Ascot and hidden palace rooms, we are also swept up in family dynamics that add narrative weight to the fairy tale.

Even for those, like me, who are not really into romance novels, this lively book is fun to read. But what I appreciated most were the issues it raises. What do we ask of celebrities, royal or otherwise? How does the public life (and inherent expectations of behavior) of a royal impact their life choices? What about their mental health? And how, in the midst of living a public life, can a private life unfold?

Weighty questions indeed, but their addition makes The Royal We an emotionally rich story that lets readers feel the pinch of the glass slipper.