Before I finished it, I was indiscriminately recommending The Secret Scripture, Sebastian Barry’s entrancing 2008 novel that alternates between a 100-year-old woman’s clandestine reminiscence, hidden beneath the floorboards of her asylum bedroom, and the journal of her facility’s chief psychiatrist. 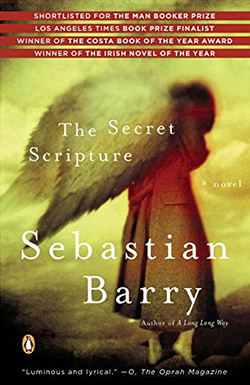 Conscious of her waning days, Roseanne Clear begins writing in the early 21st century, decades after the relevant events of her life. She hopes to produce “some kind of brittle and honest-minded history of myself,” but one that the passing of time can’t help but cloud. War and religion also cast a shadow that blurs Roseanne’s recollections, an account sometimes corroborated, sometimes contradicted, by the official papers Dr. William Grene refers to in his diary.

It’s hard to know what to believe, a current of uncertainty that carries you through their parallel entries. Everything is ambiguous, in the satisfying way that good fiction reflects real life, until a soap-opera twist at the end. That, I just couldn’t believe.

More alert readers than me saw it coming, I discovered in online reviews, and seemed more put off by the predictability than the improbability, if it bothered them at all. I like to think that overlooking the clues was a sign of my appreciation for the book as a whole: There’s no way that could happen.

But the letdown does not break the spell. My recommendations were premature, but I decided they needed only clarification, not outright retraction.

Look beyond the bow Barry ties around The Secret Scripture and there’s a story alive with language, lyrical and earthy, as rich and redolent and messy as the peat bogs of its western Irish setting. Yeats would be the poet most associated with the time and place of the book’s main action — Sligo during the Irish battle for independence and subsequent civil war in the early 1920s — but Barry’s digging with his pen, like Seamus Heaney.

In the guises of Roseanne and Dr. Grene, he’s turning over history, personal and national, to see what’s hiding underneath. Both characters look away at times from what they find, unable to face the past.

Roseanne’s tender remembrance of an experience with her father, we come to learn, could be a suppressed memory of a violent trauma. Maybe they were two different events and in focusing on one she consciously left out the horror of the other. Maybe one, or both, never happened or differed from her distant recollection or the doctor’s interpretation of the documents in his possession.

What’s not in doubt is that young Roseanne is a victim of a social structure hostile to women and to those perceived (amid the scarred country’s paranoia after civil war) to be unfaithful to the prevailing order of the home, the church, the state. She never should have been committed. But that was more than 50 years ago now and nothing taken from her can ever be returned.

“I am not an entirely childless person,” Roseanne writes in her indirect way, like sunlight glinting off a broken mirror. Details accumulate in the words of Roseanne and Dr. Grene, shards of fact but never the whole truth about lives buffeted by sin and tragedy and mystery.

Soon the final revelation glues pieces of plot together, imposing implausible order on a story that captures unruly reality and unreliable memory so well.

The authenticity of The Secret Scripture transcends the ending. Written only for themselves, Roseanne and Dr. Grene’s private recollections ring true, but only as true as any story we tell ourselves.