I greatly admire Carolyn Woo, the ebook was only $3.99, and I was flying multiple legs to an annual retreat — a trifecta of reasons to read what is a personal memoir but also an introduction to Catholic Relief Services (CRS) and the efforts of its 5,000 employees and volunteers. 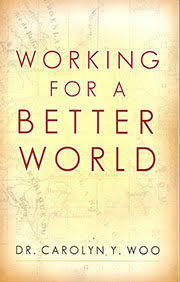 This is a book written by a dedicated collaborator with Holy Cross religious, for whom I am grateful. And it is a book about discernment, about which I am deeply interested. Woo describes the spiritual terrain of discernment as she moved from Hong Kong to attend Purdue University in 1972 — where she earned three degrees and became a faculty member, an administrator and, finally, part of the university’s leadership team — then accepted a job at Notre Dame in 1997 and, most recently, made the leap to CRS headquarters in Baltimore in 2012.

Flanked with a foreword by the now deceased Father Theodore Hesburgh, CSC, and an afterword by Boston’s Cardinal O’Malley, Woo’s prose is adorned with humility born of honesty, wisdom born of prayer and insights born of experience.

Upon being asked to serve as chief executive officer of CRS, Woo was forced into the difficult decision to leave her beloved Notre Dame, where as a third-term dean she had raised the Mendoza School of Business to a top rank, and to serve at a tremendously important global ministerial outreach of the U.S. Conference of Catholic Bishops. She turned to Father Ken Molinaro, CSC, for spiritual direction. Currently serving as novice master, he has always arisen daily at 4:30 a.m. I arise at 5 a.m. but I am neither wise nor holy. If only the determining differential was 30 earlier minutes!

From those conversations arose a beautiful gem of an insight applicable to us all who seek to know and do God’s will: discernment is not about pros and cons but about joys and fears. This is the language familiar to the heart.

And Woo had wrenching fears. With admirable honesty she confesses having had knots in her stomach. The prospect of giving up the career security of tenure, leaving dear colleagues and friends, and relinquishing the familiar academic world for the tumultuous world of global aid caused her frequent night sweats.

She actually names a “fear of incompetence.” Amazing isn’t it, the power of this particular fear? We all experience it, even a well-respected and successful academic who served as associate provost at Purdue and three terms as dean of a top-ranked business school, and a beloved wife and mother. She shares wise counsel in battling this fear. “First, I should not put myself down and focus on things I had not done. What we do not know in the universe is unbounded. Humility does not require us to deny or diminish what we have done, what we have invested to learn, and the contributions we stand to make.”

Woo also names the fear of danger — working in global hot-spots, which demands further trust in God’s Providence. She names the fear of change — moving from the familiar to the unknown, which is precisely at the heart of the call made by Christ to each disciple.

Just as the passion of Golgotha is followed by the triumph of the Resurrection, Woo names her fears and then gives witness to the joys that reside in her heart — joys that had arisen over a lifetime. For example, she writes convincingly about the invisible hand of God’s Providence at work in her childhood and life’s journey. The litany continues with the struggles and goodness of her family, the example of hard work and dedication by her beloved nanny, the strength of her childhood educators, the Maryknoll Sisters, the kindness of those who befriended her at Purdue, and the professed Catholic mission and ethos of Notre Dame.

Woo taught this aspiring academic confidence. She taught this Holy Cross religious discernment. And she taught me, one prone to cynicism, the goodness of those who seek excellence in a world deeply in need. Another trifecta. What a wonderful read from a strong and beautiful woman of faith.

Father Michael Wurtz is a doctoral student at the Pontifical Athenaeum Sant’Anselmo in Rome, Italy.