I witnessed the funeral and remembrances of Father Theodore Hesburgh, CSC, last week, and I wanted to record some fleeting impressions — both for myself for later, and to share with those from the Notre Dame family who could not be on campus for this event. This is what I will remember:

— His simple spirituality. Father Ted’s favorite prayer—“Come Holy Spirit”—was indicative of a life of simple faithfulness, which he probably needed to navigate the complexity he faced every day. Priests who spent time with him in his final weeks reported that he would simply speak out loud to Mary in prayerful conversation. He was practicing eternity, and his willingness to do so publicly was yet another way in which he led us.

— The wooden rosary carried by Father Peter Rocca, CSC, rector of the Basilica of the Sacred Heart, as he walked in front of the hearse carrying Father Ted’s body to the Holy Cross Community Cemetery. Father Rocca quarterbacked two days full of some of the most important liturgies ever celebrated on this campus, and here he was, reciting the rosary to himself at the head of this procession — I could see his lips moving as he walked and kept an eye on everyone involved. It made me realize how serious we are about getting Father Ted into heaven.

— The alma mater. The song that was composed to help the Notre Dame family grieve Knute Rockne helped us place Father Ted in Our Lady’s arms. It closed the funeral Mass and could be heard through the speakers outside the Basilica. The students who lined the road to the cemetery held each other in a swaying embrace and sang. The song also closed the memorial service in Purcell Pavilion, played by a tuxedoed Marching Band. For both Rockne and Hesburgh, the song raised our voices and spirits in praise, even in the face of death — a fitting way to honor the vision of these men.

— Guards at the visitation. Some 12,000 people streamed through the basilica to view Father Ted’s body. Two Holy Cross seminarians accompanied the casket. Nearby, two ROTC cadets stood at attention. On the hour, these guards changed — the cadets with a salute and tight marching spin, the seminarians with a handshake and a nod. All were equally dutiful and solemn.

— Students accompanying Father Ted to the cemetery. The sight of so many students lining the road to the cemetery to pay tribute on this final journey impressed many, but what most don’t know is that these students had been standing outside for nearly an hour before the procession passed by. The temperature, with wind chill, was right around 0 degrees, and they were shivering because they came dressed to show respect. They stood resolute, solemn and dignified.

— The cigars. Hundreds of students gathered around the Hesburgh Library and the statues of fathers Ted and Ned to have a final smoke Thursday night. Area businesses donated 400 cigars for the event. I heard a rumor that Father Ted was buried with a cigar in his sleeve.

— The quiet pride in this University. From the moment news of Father Ted’s passing broke, everyone knew that we had to get it right — that this mattered. Father Ted claimed so much for Notre Dame. This was Notre Dame’s chance to claim Father Ted. This pride showed in everything, and many employees worked long and late. Every door I approached was opened for me with a smiling face telling me “welcome” and “thank you for coming.” 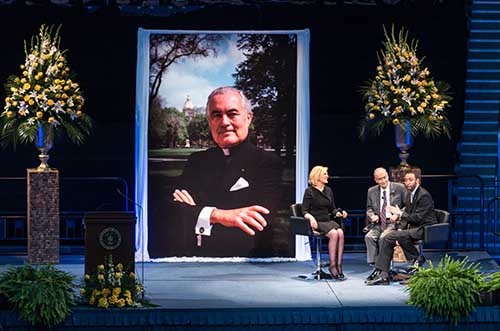 — The portrait of Father Ted that anchored the stage of the memorial tribute. He was shown standing in front of the Golden Dome, and you can see Father Sorin’s statue behind him. Sorin’s statue was placed at the old entrance to campus, where he used to stand to welcome students as they returned to campus. Hesburgh expanded the campus, and so he stands at the main circle as the face of Notre Dame to the world.

— Father Ted’s magnanimity. That word comes from the Latin magnus, “grand,” and animus, “soul.” Alan Simpson, the former senator from Wyoming, said Father Ted had a “grand sense of himself.” He did not mean Father Ted was prideful — he was pointing at Father Ted’s confidence in his gifts and his calling. Father Ted respected himself enough to use every ounce of his wit and will to serve God and humanity, and no stage was too small or too big for this endeavor. Everyone who spoke this week talked about the greatness of Father Ted’s spirit in one way or another.

— Father Ted’s excellence. Condoleezza Rice said, “You don’t tell Father Ted that you’re tired.” So many talked about the light on in his office late at night. His example urged us to pursue excellence with equal vigor.

— The funeral Gospel reading. Father Ted had chosen Matthew 25 for his funeral, where the Lord sits in judgment. Those who fed the hungry and visited the imprisoned are saved because what they did to the least, they did to Christ himself. It is the only place in the Gospels where Jesus tells us how we will be judged. Father Ted did many, many things, and with this Gospel we can see that his guiding principle was to lift up the least of our brothers and sisters. It is what a priest does — he serves the image of Christ in others, especially the suffering.

It was a moving week, a momentous week. I can tell you that the events inspired new zeal in faculty, staff and students to follow Father Ted’s example in serving God and humanity with Our Lady’s University. We all want to make this place worthy of such a vision and such a great priest.

Josh Noem edits the FaithND website for the Alumni Association.