Norbert Krapf’s Catholic Boy Blues contains more than 10 dozen poems. The book is subtitled “A Poet’s Journal of Healing,” and that’s how it reads — shards of experience, signposts along a fitful journey. The collection bears the language and rhythms of its own origins. The poet took to writing the poems as a kind of therapy; he was sexually abused by a Catholic priest as a boy in small-town Indiana.

“Nothing about this book was easy,” Krapf wrote in an email. “There’s a reason I didn’t write about this, or didn’t want to, until 50 years after the abuse ended in 1957.” 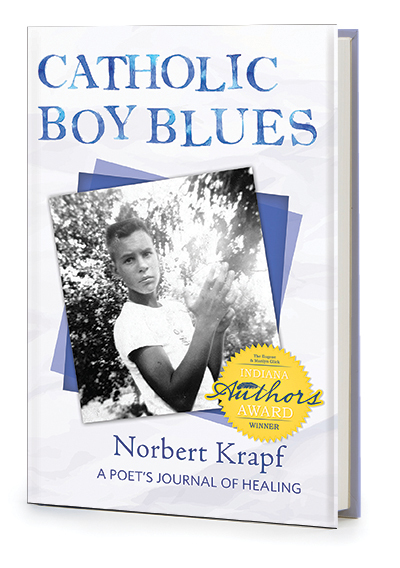 The language is deceptively simple, direct, bare. But it cuts to the bone, just as blues lyrics reduce oceans of human emotion to plain words elemental in their power.

But Krapf ’66M.A., ’71Ph.D. took to the task of writing in early 2007, not as a mere victim looking for personal catharsis but as a poet who uses words like flint to light up truth. And truth can be disarming, painful. In “The Hand,” Krapf reminds us that the hand that fondles altar boys “rubs oil on the forehead of the dying” and “blesses and baptizes the new-born babe.” In “Counting the Collection” the poet takes the reader into the room where altar boys silently but knowingly endure the disturbing sounds coming from behind a closed door.

Krapf does not let the reader turn away; he makes us look — at the evil corruption of altar boys lured into private molestations by a sinful parish priest. His suggestive, artfully worded revelations of the brutal acts inflicted upon children become more real, more impactful than newspaper headlines and angry broadsides.

The poems don’t stay in these dark rooms, however. It is, after all, a journal of healing, a song of redemption. The poet moves on, the boy struggles, trying to come to terms with abuse and God, holy talk and human depravity, about the wounded boy living in the man, and the man reaching back into the past to help the boy. The hard honesty of the abuse gives way to the hard work of human maturation — and the persistent search for God.

Archbishop Joseph Tobin of Indianapolis, writing in The Criterion, said, “A reading of Catholic Boy Blues permits one to glimpse the incredible pain of victims of sexual abuse. Yet the spirit of Norbert Krapf emerges from this terrible crucible to offer a testimony to the power of God to bring light out of darkness and, finally, life from death.”

Krapf is the author of 11 poetry collections, was a long-time English professor at Long Island University, the recipient of several major poetry awards and poet laureate of Indiana from 2008 to 2010.

It was in 2004, when he moved back to Indiana after his years on the faculty at Long Island University, that accounts of others’ abuse resurrected memories of his own experiences. A spiritual retreat in 2006 and subsequent counseling led to his writing some 325 poems over the next seven years. “Just writing the poems was healing,” he said in an email, “but in going forth with the publishing to help others, I found more healing took place in me.”

While some may find help and solace in the truths laid bare by the author, others — I’m sure — have had enough of this scandal and would prefer to put it behind us, to bury the past with the past. In “The Dirty Little Secret” Krapf acknowledges this, giving voice to parishioners:

Why could you not keep your dirty little secret
To yourself? How hard
Would that have been?
Why, why, why did you
Have to tell it to the world?

Why you want to make
Us all look so bad?
What’s the point of exploding
this story fifty years later?
What good will this do?
Is this what we need now?

The thing is, lots of damage was done to many innocent children, and to their families and spouses, and to the Church, and to many good and loyal shepherds. The effects are still with us all; it will take more time for the healing to be done. And it should be up to the victims — not the perpetrators or those unaffected — to determine when the healing time has come, and what it takes to get there. Catholic Boy Blues offers one victim’s path to hope.