It is not, I hope, a character defect that I enjoy the novels of Charles Dickens and don’t feel as if I’ve truly celebrated Christmas unless I watch at least one of the many film iterations of his 1843 novella, A Christmas Carol.

This year, I expanded upon my holiday touchstone by checking out one of the Christmas stories of Anne Perry. I’ve read two of her mystery series, both set in Victorian England — one featuring William Monk; the other Charlotte and Thomas Pitt — but her holiday novellas, 14 as of this year, have somehow escaped my attention. Until, that is, I spotted one on a table as I walked into a local library. The snowy days-of-yore scene on the front cover spoke to me of A Christmas Carol, and Perry’s name and her ability to craft stories with finely wrought historical detail told me her offering would be worth my time. 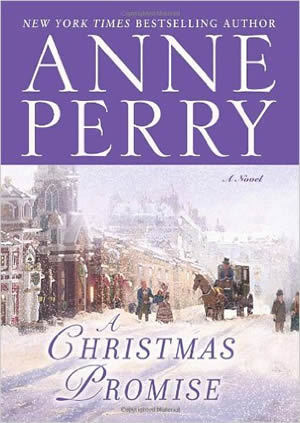 A Christmas Promise, released in 2009 and seventh in Perry’s series of holiday tales, immediately evokes the Victorian era, with butcher shops displaying geese and rabbits for the upcoming holiday meal. True to the hard times of a Dickens’ work, the opening scenes are set in the East End slums of London, where 13-year-old Gracie Phipps chances upon the distraught Minnie Maude Mudway. The half-frozen 8-year-old is desperately searching for Charlie, the donkey who pulled her Uncle Alf’s rags-and-bones cart. Uncle Alf, Minnie tells Gracie, had been found dead in the street the previous day, perhaps beaten to death, and both his cart and Charlie are nowhere to be found.

The two girls, both orphaned, form a bond, and Gracie agrees to help Minnie in her search. Their investigation leads them through a series of encounters with various street characters, including an amusing chat with a cheerful boy named Monday who sweeps the manure-laden streets, and they learn from a chestnut-seller that Alf had somewhere found what looked to be a gold box. The two eventually seek help from a shopkeeper named Mr. Balthasar, who is, Gracie has been told, a wise man. And yes, that name is a direct nod to Balthazar, the Magus who gave Jesus the gift of myrrh.

As the girls’ detecting continues, we are never far removed from the bleak lives of the poor. Gracie, for instance, lives with her grandmother, who also is the guardian of “the two hungry little boys Gran’s son had left when he died.” Gran makes money by doing laundry, “spending all day up to her elbows in hot water, caustic, and lye, heaving other people’s wet linen from one sink to another, shoulders aching, back so sore she could hardly touch it.” And Gracie, at 13, has no great expectations of what the future holds for her, as “very soon she would have to go to the factory like other girls.” She does, however, have a specific dream: She wishes she could read and write.

The eventual solution to the mystery of who killed Alf and where Charlie the donkey ended up does not magically change the hardscrabble existence faced by the two orphans, but Perry does wrap things up with a Christmas Eve scene that offers a message of hope and deliverance. And although it is not necessary to have read Perry’s novels to enjoy her holiday novella, those who follow her series featuring Charlotte and Thomas Pitt will recognize that Gracie did not end up at a factory but as a maid for the Pitts, happy in her job and able to read and write.

Although the Cockney dialect takes time to get used to and the mystery in A Christmas Promise is a bit thin, I did appreciate the literary fun Perry has here. While Mr. Balthasar, for instance, can be read as one of the Magi, he also calls to mind another late 1800s literary detective. And that mysterious gold box, Mr. Balthasar tells Gracie, may hold something evil, a commodity someone might kill for, another sly wink to a famous detective who had a particular fondness for cocaine.

While A Christmas Carol ends with a changed man who “knew how to keep Christmas well,” and A Christmas Promise bestows a message of redemption, Perry also both suggests and presents here another worthwhile gift. As Mr. Balthasar tells Gracie, “Everyone should read. There is a whole magic world waiting for you, people to meet and places to go, flights of the mind and heart you can’t even imagine.”