It’s summer when I think about the Civil War.

I think of childhood trips with dappled sunlight on Burnside’s Bridge at Antietam and the cool touch of Devil’s Den boulders at Gettysburg. I think of humid Fourth of July nights, when my family would go down the street from our Maryland home to watch fireworks from the roof of a mansion where Union General Joseph Hooker was relieved of command. I think of the soft violin sounds in “Ashokan Farewell,” the theme to the Ken Burns series, which often wafted from my father’s television set. 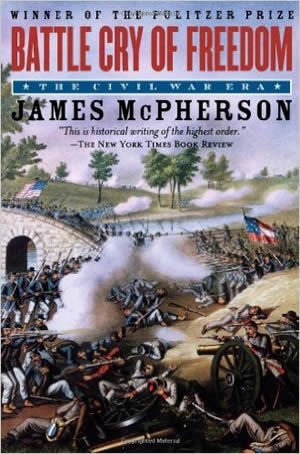 So nostalgia, probably more than intellectual curiosity, is what led me to start reading James McPherson’s Battle Cry of Freedom: The Civil War Era. Published in 1988, the book was written for the Oxford History of the United States series and was an attempt to compile an authoritative single volume on events that can span many more.

If you know the key players, events and consequences, the reading pleasure is in the journey. McPherson, now an emeritus professor from Princeton, starts the story at midcentury with the Mexican War and westward expansion, when the virus of America’s original sin — slavery — began the fever that would result in unimaginable bloodshed.

One wonders while reading about jayhawkers and copperheads, Free Soilers and nativists, Dred Scott and John Brown, if the people caught up in these events had a sense that the center could no longer hold. Even with more than 150 years passing between the start of the Civil War and now, it is hard to pick the point where the first version of the American experiment failed. Was it at 4:30 a.m. on April 12, 1861, when the first shots were fired on Fort Sumter? Was it five years earlier, when Preston Brooks attacked Charles Sumner on the floor of the U.S. Senate with a walking cane? Was it far earlier, when the ink first dried on the Constitution’s clause deeming blacks as only three-fifths of a person?

Historians, including one as talented as McPherson, will probably never be done debating that. But reading Battle Cry, in an age where the mental gymnastics of contrarianism are often celebrated for the exercise alone, is refreshing on another score: the war’s cause.

The Union and Confederacy, McPherson writes, both used the vocabulary of the country’s founding to paper over the conflict’s broken heart. In the South, they celebrated liberty and self-determination, and defending their land from invaders. In the North, they celebrated the inviolability of the Constitution and preservation of nation, and defending their country from traitors.

McPherson cuts through that. While differences in industrialization, wealth and conceptions of progress surely contributed to the start of combat, the author dismisses distractions by simply quoting the participants’ own words.

“Our new government is founded … upon the great truth that the negro is not equal to the white man,” said Alexander Stephens, the vice president of the Confederacy. “This, our new government, is the first in the history of the world based upon this great physical, philosophical, moral truth.”

And so, as the temperature rises outside, I’ll turn the pages of Battle Cry and revisit a part of history that has always felt alive to me. Once again, I’ll think about how it would feel to wear a wool uniform in the hard Maryland heat; how it would sound when cannons and rifles first fire; and whether boys in blue and gray truly knew what they were fighting for, and if they could ever imagine the country they would create.

Liam Farrell is a writer who lives in Maryland, near railroads that were guarded by Union troops.