I remember where I was when I saw them.

On Thursday, December 20 — just hours from winter break — I was scrolling through Twitter in my apartment when the photos began to crop up on my feed. Michelle Obama. Barclays Center. Thigh-high, sparkly gold boots. 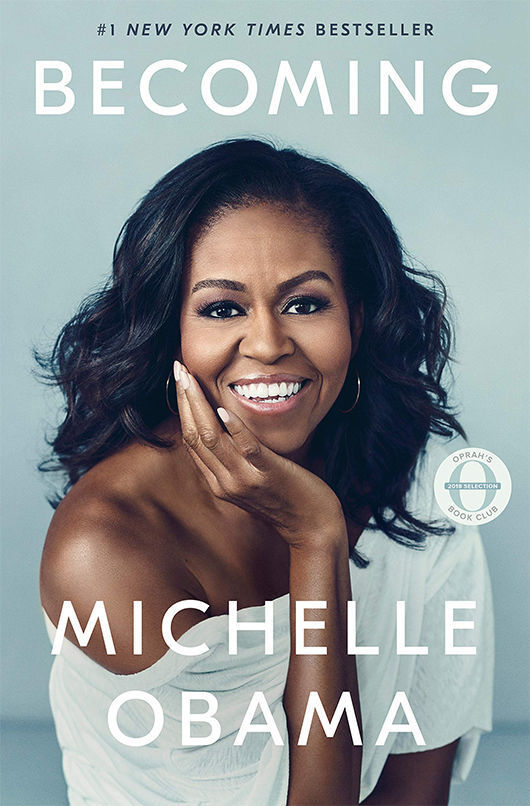 The former first lady had stepped out in the Balenciaga footwear heard ’round the world as part of a promotional tour for her new memoir, Becoming. From the moment I saw the boots, I knew: I needed to read this book.

Then I awoke on Christmas morning to find Becoming — along with a half-dozen other books — waiting for me under the tree. While I spent my break lounging and catching up with friends, my mother picked it up and gave it a read.

My mom and Malia and Sasha’s mom are the same age, so there was a lot in Obama’s tales of her 1960s- and ’70s-era upbringing that Mom found familiar. My mother raved about the book, and by the time it was my turn to read it, I worried that I might not like it as much as I’d thought I would. My literary tastes hadn’t overlapped with hers since Harry Potter. How could I possibly enjoy this tale of late-baby-boom girlhood as much as she had?

It took me mere pages to realize that, like J.K. Rowling before her, the first lady had managed to bridge my family’s generational gap.

Just as my mother had related with the girl growing up in the midcentury Midwest, I related with the driven young feminist I encountered in Becoming’s pages — the woman who would grow up to be the Balenciaga boot-wearing “shero” of my Women’s March dreams.

In the opening chapters, we learn of Obama’s journey through Chicago Public Schools, Yale, and Harvard Law, and of her early days in the workforce as a high-powered lawyer. My credentials might not be as impressive as hers, but I still saw a lot of myself in the overachieving, hard-driving young woman she describes. Just like my friends and me, she faced the big questions of young adulthood: Do I pursue happiness or practicality? Should I seek financial stability or a vocation that fulfills me and helps others? Is there a way to do both?

This first section also made something else clear: Michelle Obama is an incredible writer. It’s possible she had a ghostwriter, but still, I don’t pick up celebrity memoirs — even ghostwritten ones — for the stunning prose. I choose them for the access to their subjects’ personal lives. To me, Becoming seems to be the rare autobiography that strikes the balance between curious-onlooker voyeurism and actual high-quality writing.

It also pays special care to the dignity of every character in Obama’s story. From her hard-working, stay-at-home mom to her harried second-grade teacher, she makes frequent references in the book to the circumstances of those around her. The teacher whose class she transferred out of wasn’t just indifferent or bad at her job; she was exhausted by the increasingly difficult demands of working in an under-resourced urban school. The great-uncle who insisted on three-piece suits by day and pressed linen for yardwork wasn’t just a quirky relative; he was a former Pullman porter, socialized into stuffy politeness by decades of thankless service to others. Obama seems to intuit and respect the backstory of everyone she mentions in the book, in a way I know I fail to do in my own life.

Around two-thirds of the way through the book, Obama recalls the millions of people who crowded onto the freezing-cold National Mall on January 20, 2009, for her husband’s inauguration as the 44th president of the United States.

I was one of those people. I remember the day vividly from my own perspective: the bitter, freezing cold; the hours my classmates and I spent standing and waiting for the festivities to begin; the angling to get a good look at Aretha Franklin’s hat. As Obama described those same experiences from the other side of the operation, I found myself confronted with a reality I had never considered: that everyone on stage had a personal story from that historic day, too.

I had never considered how much colder it was for the first family, who had to look dignified in far fewer layers of Under Armour than I had on. I never knew that Barack and Michelle attended 10 inaugural balls that night in uncomfortable couture, only collapsing into bed more than five hours after my classmates and I had returned to our hotel. As a teenager — and, I had to admit, even now — I had never stopped to consider that even the president and first lady are real people.

As I read the three sections of Becoming — “Becoming Me,” about Michelle’s childhood and young adulthood, “Becoming Us,” about her relationship with Barack, and “Becoming More,” about the Obamas’ days in the White House and beyond — I had this feeling over and over. Not only does an ex-first lady have a perspective I may not have considered, but so does her college roommate, and her mom and the constituents she met on the campaign trail. Here they are supporting characters in her story, but they are treated with dignity nonetheless. How many supporting characters in my life could I treat with more dignity and respect?

Obama says in no uncertain terms in Becoming that she will never run for office. As a fan of her Balenciaga feminism and as a reader enthralled by her obvious intelligence and evident compassion for others, I’m tempted to be saddened by that news. But if this book taught me anything, it’s that every person — from grade-school principals to heads of state — has a story that could fill a book, and a perspective that deserves to be valued. The greatest gift we can give them is to respect it.