Marty McFly races through time in Back to the Future. The Starship Enterprise catapults to distant galaxies in Star Trek. Creatures from Mars attack the Earth in H.G. Wells’ The War of the Worlds. An experiment in artificial intelligence goes awry in Ex Machina.

Fans of science fiction can easily generate a list of their favorite works that focus on such themes as time travel, extraterrestrials, artificial intelligence, alternate universes and any number of speculative ideas, some of which approach reality. 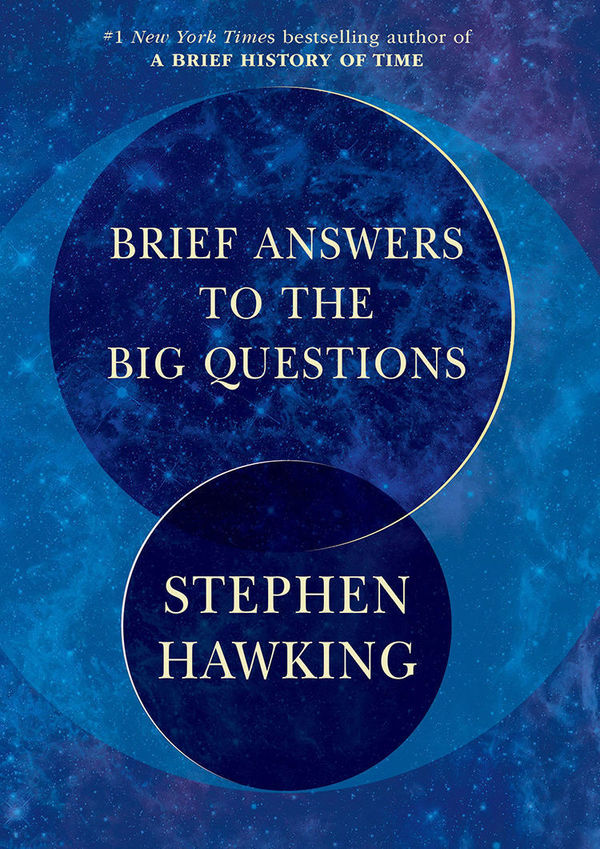 Those popular sci-fi concepts are why I grabbed Stephen Hawking’s Brief Answers to the Big Questions when I spotted it at the library. At barely 200 pages, with short chapters, the book includes fascinating essays on futuristic topics. As he writes, “[T]oday’s science fiction is often tomorrow’s science fact.”

Hawking, the famed cosmologist and author of the bestselling A Brief History of Time, died in 2018 at age 76. His Brief Answers to the Big Questions project was finished by academic colleagues and others, using the theoretical physicist’s personal archives.

“Meeting a more advanced civilisation, at our present stage,” he writes, “might be a bit like the original inhabitants of America meeting Columbus — and I don’t think they thought they were the better off for it.”

So score one for all those aliens-attack-the-Earth books and movies.

If humanity might be treated unkindly by extraterrestrials, we get little consolation from Hawking. “The human race does not have a very good record of intelligent behavior,” he declares at one point.

That pessimistic view is on full display in my favorite chapter, “Will artificial intelligence outsmart us?” Hawking’s engrossing take on AI outlines the ways that its “potential benefits are huge,” but he adds that the risks are enormous. Or, as he says, “the advent of super-intelligent AI would be either the best or the worst thing ever to happen to humanity.”

Hawking doesn’t dismiss the idea of artificial intelligence taking on “a will of its own.” And he worries about its effect on such things as the arms race, genetic engineering and how we connect with the digital world.

So also score one for HAL 9000, the “I’m sorry, Dave, I’m afraid I can’t do that” supercomputer in 2001: A Space Odyssey. That was just fiction, Hawking writes, “but the wariness is there.”

Science fiction does take a hit in the “Is time travel possible?” chapter. Here, Hawking goes to his roots as a mathematician and physicist, offering brief discussions of geometry, general relativity, quantum theory and M-theory, also known as string theory.

Most of what he discusses in this chapter was beyond my grasp, but Hawking’s conclusion offers light at the end of the time-traveling tunnel. While he’s not entirely sold on the possibility, he ends the chapter by noting that “science-fiction fans need not lose heart. There’s hope for M-theory.”

That hope apparently has something to do with the existence of 10 dimensions, but please don’t expect me to explain it. So (maybe) score one for Doc Brown and his DeLorean.

Brief Answers to the Big Questions fulfilled my quest for information from an expert about intriguing scientific and sci-fi issues. It also reminded me that all those the-world-is-ending scenarios may be closer to reality than we would like to think. While educating and entertaining, the man who called himself an optimist continually presents a stark message. “I think we are acting with reckless indifference to our future on planet Earth,” Hawking writes.

The science fiction that many of us enjoy, the movies and TV series, the short stories and novels, all tend to portray a future society that Hawking says is “far in advance of ours, in science, in technology and in political organisation.”

So it’s time to shape the future, he admonishes us. “Through scientific endeavour and technological innovation, we must look outwards to the wider universe, while also striving to fix the problems on Earth.”

How we do that is indeed a very big question.

Carol Schaal retired as managing editor of this magazine in autumn 2017. She has since published All the Deadly Secrets, a mystery novel available at Amazon. Email her at schaal.2@nd.edu.