Harriet Martineau wrote “Briery Creek” in the winter of 1833-34. It is part of her series Illustrations of Political Economy, tales she wrote monthly to introduce readers to the principles of economics by way of familiar situations from everyday life.

In her Autobiography Martineau said, “In ‘Briery Creek’ I indulged my life-long sentiment of admiration and love of Dr. Priestley, by making him, under a thin disguise, the hero of my tale.” This tale is worth some careful attention here in the 21st century.

Joseph Priestley (1733-1804) was a dissenting British minister and a Unitarian, as well as a scientist (one of the discoverers of oxygen), philosopher, historian and grammarian. As Wikipedia tells us, Priestley believed “the study of history furthered the comprehension of God’s natural laws.” However, because of his support of the French revolution and attack of many Church of England doctrines, a mob of old-time believers burned his Birmingham house and church in 1791. This sent Priestley across the water in 1794 to the young United States. He lived out the final decade of his life in Pennsylvania peacefully, free to work, think, write, speak and worship as the spirit moved him. 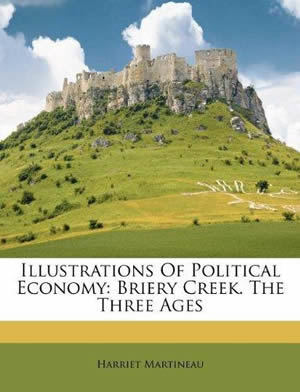 Martineau prefaces the story with a “Summary of Principles Illustrated in this Volume.” “Consumption is of two kinds, productive and unproductive,” she writes. The productive kind aims at “the restoration, with increase, in some new form, of that which is consumed.” So in today’s terms, value is added to the resource. Unproductive, however, provides “the enjoyment of some good through the sacrifice of that which is consumed.” The resource is used up in the process, and after the thrill is gone what remains is only the memory.

The Dr. Sneyd of the story is, among many things, an astronomer. He has developed a larger telescope and is anxiously awaiting the arrival of a pair of precision lenses from London. But he is not sitting idly by, he has observations to be made, data to analyze, reports to write, meetings to attend, outside developments to keep aware of.

Dr. Sneyd’s son, Arthur, is an up-and-coming community leader. Thanks to vigilant management, his small farm is beginning to turn a profit. He also sets up a kiln, hiring a laborer to make bricks. Neighbors are buying the bricks to upgrade their log homes, and Arthur and brick-maker Dods have a promising enterprise going on.

Arthur’s opposite number in the story is his brother-in-law, Mr. Temple, husband to Dr. and Mrs. Sneyd’s daughter, Louisa. Mr. Temple is a different kind of man. He inherited a fortune and commands 50,000 acres known as Temple Lodge. He is also a slaveholder. Of Mr. Temple, one neighbor says, “Why [Arthur] should be left to toil and make capital so painfully and slowly, when Temple squanders so much, is a mystery to every body.” Mr. Temple often fails to pay his employees all that they have earned. He makes poor decisions, and jobs have to be constantly redone. He is short-tempered and overbearing: As a result, his wife is unhappy and his poor son, Temple Temple, known as “Temmie,” is a timid, frightened, anxious boy.

With Arthur at their leader, the folks of Briery Creek joyfully come together to complete community projects, most notably a bridge over the creek so goods from outside can reach town safely. They are a people on the way up and see their future as a market town taking shape before their eyes. Dr. Sneyd envisions a marketplace of ideas growing up along with it. Since the town has no minister of its own, Dr. Sneyd delivers a sermon full of thanks for the plenteous providence they enjoy and their inspiring future prospects.

Mr. Temple has other ideas. He has a new home and chapel built on Lodge grounds, then invites a minister-and-wife team, Rev. and Mrs. Ralph Hesselden, to do all the preaching in Briery Creek. After getting to know Dr. Sneyd, “the picturesque clergyman and his showy lady” are “duly shocked at a man of his powers having been given over to the delusions of human reason, and at his profaneness in having dared to set up for a guide to others while he was himself blinded in the darkness of error.”

So where the forest gives way to the prairie in the young United States, the new and old ways collide over the heads and in the hearts and minds and souls of hard-working plain people trying to make homes for themselves using only the resources immediately available and their homegrown skills, abilities and imaginations while they live their lives alongside each other.

Once Martineau has worked out her agenda, the plot moves quickly.

On a night not long after, Mr. Temple disappears. “He had fled from his creditors, and to escape the vengeance of the land-office for his embezzlement of funds which had come into his hands in the transaction of its business. . . . His mansion, shrubberies, conservatories, and ornamental furniture could by no method be made to compensate for the property which had flown to the moon, or somewhere else where it was as little accessible.”

Martineau completes her lesson with this word on Mr. Temple. “[He] was a criminal before he committed fraud. He injured society by exhausting its material resources, and leaving no adequate substitute for them.”

His son, Little Temmie, however, grows into a fine young man who takes control of Arthur’s farm and leads it into the 19th century.

While Mr. Temple lived by the old way, and demanded loyalty and allegiance go to him, the Sneyds swear by  “the laws of nature’s God” as they said then, and the laws of healthy markets that work to the greater good of the greater number of humans. For defying these laws Temple ultimately paid the price: expulsion, shame, fear and want.

Thus taught Harriet Martineau, called in some circles, not so admiringly, “the little deaf lady” — her universally recognized piece of gear was her ear trumpet — in the year of Our Lord 1833. But readers didn’t burn down her home, they bought her books by the thousands; she even outsold Dickens. Although she was called an infidel from numerous pulpits across the English-speaking world, her pen-pal relationships with the likes of Ralph Waldo Emerson kept her reputation respectable within the community of writers, thinkers, academics and scientists who also kept the work of Charles Darwin before the dissenting public. Too bad they couldn’t do as well for Harriet Martineau. She was a lady with a lamp, and she still has things to say to us.

Martineau’s works are in the public domain, and texts can be found on Kindle and through the Online Library of Liberty.

Lyn Relph taught English at California State University Chico from 1966 to ’95. He and his wife, Kate Hulbert, live in Tucson Arizona.