I fell in love with Brighton instantly. It was the spring of 1996. I was teaching in England the year after graduation and, while seeking escape from my classroom ineptitude and those nagging existential matters that come with being 22, the seaside resort became for me what it had been for generations of middle-income and working-class Britons: a day-trip haven from daily cares; a cheap dalliance with sunshine, ocean breezes, romantic possibility and the limits of one’s own imagination. 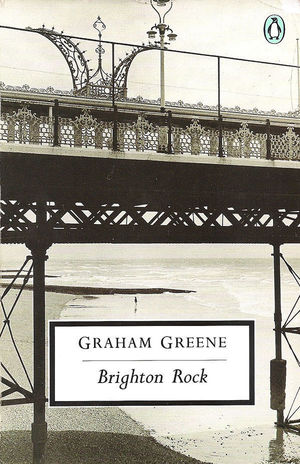 I hardly saw the city itself. Brighton for me was The Who singing Quadrophenia, most of which I’d heard them perform live in London that year. It was fights on the beach between the Mods and the Rockers, though the bottles and knives and motorbikes had all but disappeared a quarter-century before. It was the West Pier with its magnificent Victorian dance hall, severed from the beach by violent storms and left to rot as a tantalizing and expensive perch for gulls who could alight the moment the whole thing collapsed into the sea — or burst into flames, as it would in 2003. I went as a pop-culture tourist and got most of what I was looking for, though I don’t recall seeing anything that looked like the rock Jimmy clings to at the end of Pete Townshend’s rock opera.

Today Brighton is, according to one survey, the “happiest place in the U.K.” It’s an arts town, galleries both prim and avant-garde having popped up amid the open-air bars, kitsch dealers, vacationer’s rowhouses and chip shops. All that’s there in Graham Greene’s 1938 noir novel, Brighton Rock, but it’s mere pastel background to the city he wants you to see. Americans who have visited Atlantic City and wandered a block too far beyond the boardwalk and the casinos understand the flimsiness of this veneer. Greene’s Brighton is a seedy, blighted bookie’s city with a horse track at its hub. Protection rackets are the leading industry and a Capone-style gangster is effectively mayor.

As authentic admirers have noted, Greene, whose literary career spanned from 1929 into the ’80s, saw himself as the author of two kinds of books. He wrote “entertainments” like Our Man in Havana, which I inhaled on a flight home from Cuba, and “novels” — works of self-conscious literary aspiration, in which he probed human motivations and morality with a patrician’s tidy tastes and prejudices, a Marxist’s abiding sensitivity to injustice and the scars of poverty, and a Catholic’s penetrating grasp of human nature and the deeper reality of things invisible. Searching in vain for The Power and the Glory, his masterpiece of the latter type, on my basement shelves one day in early Lent, I nearly passed over Brighton Rock. Then I thought to look it up and learned that it may land closest to Greene’s belletristic crossroads as a noir of the soul. Thriller fiction meets St. John of the Cross.

Ho hum, you say? Maybe this isn’t the book for you, but Greene had me hooked from the opening line:

“Hale knew, before he had been in Brighton three hours, that they meant to murder him.”

Wandering through the beachfront holiday crowds under a travel-writer’s pseudonym, Charles Hale, a reporter, slips from tearoom to barroom, secreting away his business cards as part of his newspaper’s scheme to lure in readers with promises of cash prizes to anyone who recognizes him. Soon he catches sight of the small-time hoods he’d crossed on a previous visit.

Seeking safety in the company of unwitting bystanders, Hale meets Ida Arnold. Boozy, free, kind-hearted, loyal, agnostic, voluptuous — Greene can’t seem to help himself with the sheer physicality of his novel and its themes of sexual attraction and repulsion — Ida is to become Hale’s posthumous champion. (Sorry, but revealing Hale’s murder is really not much of a spoiler; his fate is sealed by the end of chapter one.)

Enter Pinkie and Rose, children of Brighton’s overlooked slums. Pinkie is “The Boy,” the heir apparent to a gang left adrift by the slashing death of its former leader. Nearly devoid of a backstory save the hint that he might have burned down his own house to escape his parents and his past, Pinkie repeatedly calls to my mind Quint’s description of the shark in Jaws (“. . . he’s got lifeless eyes. Black eyes. Like a doll’s eyes. . . .”). No one means anything to him; he means nothing but fear to anyone.

Until he meets Rose, the novel’s other Catholic. Both teenagers seek transcendence in everything but spirit — brutal experience has taught them that salvation is yet another luxury they cannot afford. Seeking a way out of the hopelessness of her own home, Rose wants for everything. Her chance encounter with Charles Hale on her first day of work as a waitress ensnares her in Pinkie’s world.

For Pinkie, the religion of his choir-boy youth means little more than the self-assurance that liberation is for this world and punishment for the next. Getting away with murder means marrying Rose, who as his wife cannot testify against him. For Rose, marrying Pinkie means some hope for the domestic life and comforts long denied her. But on the night of their city-hall wedding, Pinkie buys Rose two inexpensive gifts. One is a stick of Brighton rock candy striped red, white and blue — snap it off at any point, the stick’s end always reads “Brighton Rock” in hard-sugar “ink,” unchanging the whole way through.

It is decidedly not a declaration of undying love — a fact made clear by Pinkie’s second gift, a kind of time bomb that will still be ticking in the novel’s final page. Let’s leave it at that.

If I’d thought that by reading a Graham Greene novel I might unravel the unanswered mysteries of Quadrophenia and Jimmy’s version of Brighton rock, I gained instead something far more interesting — a brilliant novelist’s take on how one believer’s religious insight may, turned slightly, become another’s moral blindness; on how tightly interwoven in our religious imagination are life and death, judgment and mercy, salvation and doom.

But like Ida Arnold, who, in the absence of police interest, goes after Pinkie motivated by some combination of conscience, fair play, personal amusement and compassion for a girl whose resilience matches her own, Pinkie and Rose have choices, and they make them.

Brighton Rock has begotten two films starring the likes of Richard Attenborough (1948) and Helen Mirren and Andrea Riseborough (2010). A positively reviewed stage version (shorn of Greene’s religious preoccupations) is currently touring the United Kingdom. Losing the religion is a pity; I wonder, what’s the point?

On the other hand, one recent Catholic review called Brighton Rock a book about hell. That’s too stark for me. Greene doesn’t reveal the abyss merely to confront us with the last things, but rather, I think, to contemplate the interminable wrestling of God’s grace with our despair. What else are we to make of the old priest’s consoling words to an unrepentant but uncertain Rose in what may be the book’s most memorable line? “You can’t conceive, my child, nor can I or anyone the . . . appalling . . . strangeness of the mercy of God.”