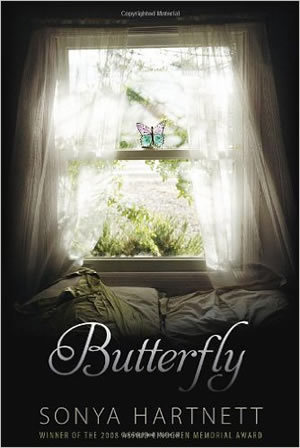 Hartnett does not disappoint. Butterfly is the story of 14-year-old Plum Coyle and the world around her, from family to neighbors to friends and the relationships that bind them. Hartnett paints raw, engaging 14-year-old girl emotions. I felt as if I were back in middle school.

In a way, I am. I have a 14-year-old daughter. Bullying has been a part of our year, which is likely why this book hit so close to home. Plum is bullied. Much more goes on in this story, however. The reader dives into the viewpoints of her two older brothers and her neighbor, Maureen, who is having an affair with one of them. And what resonated most with me was how each of those situations — the relationships — affected Plum. How she dealt with life.

I’ve consulted self-help books, psychologists and others regarding my daughter’s current situation. Fiction is yet another tool. Story offers a unique viewpoint because it requires the reader not only to empathize but also to become the character and experience her emotions.

In the case of Butterfly, for six agonizing hours, I was a slightly overweight, self-conscious teenager who is hyperaware her family has less than the Jones’ and is embarrassed about that. Plum is willing to do just about anything to fit in. She lets her so-called friends pierce her ears with a needle and ice just to make them like her. She steals their things to be more like them. Plum doesn’t think they are important things. In fact, she doesn’t think her friends will miss them. They do, and when the girls discover the objects at Plum’s birthday party, they feel confused, then betrayed and then vengeful. Plum wants to disappear or, better yet, pretend it never happened.

Instead, her friends-turned-enemies tell everyone at school what happened. That leads to a some group bullying. Girls hold their pens when Plum walks by and say, “That’s mine,” as if Plum would steal them. It takes everything she has to go back day after day, but she doesn’t tell her family. She doesn’t ask for help. In Plum’s mind, it’s up to her to find a way out of the debacle.

At a point in my reading, despite this book being written in omniscient third-person, the pain Plum feels is so real that the thin veil between character and me melted, and it was my pain, my embarrassment, my shame. I was no longer an adult looking back, I was back in the halls of middle school, aching.

Reliving those emotions revealed that not all bullying is the result of “failure” or shortcomings. It is often the result of “other” — other hair, other faith, other personal identification, anything outside one standard deviation around the norm. Plum is even bullied for daring to tell her friends that her neighbor, Maureen, thinks Plum could be a model. By daring to be better or more, Plum brings on ridicule.

In Butterfly, as in real life, middle school is trench warfare. The bullied and bullies alike rarely see more than their own acute emotional struggle. And it’s so overwhelming, they’ll do anything to survive — steal, bully, spread rumors, lie. These characters are intensely flawed, which makes them so relatable, and Plum’s fall from an already tenuous level of acceptance painful and real.

I walked away from this story with a felt sense of what my daughter, as well as her friends, are going through.

I’d like to say those feelings solved everything. I had a great talk with my daughter. We worked through the bullying. She confronted her friends. We’re on the other side. But this is my very real, very flawed life. Reading Butterfly has helped keep the lines of communication open. It has helped me be more patient and see things from my daughter’s viewpoint. They’re baby steps, but they’re real. Even though a fictional character helped me take them.

Stacy Nyikos is the author of many award-winning books for children. Her most recent, Waggers, is the story of a dog who tries to be good but his tail gets in the way (SkyPony Press 2014). For more information about the author and her books, visit her website.