I bet the old aphorism asserting that “words will never hurt me” isn’t used much anymore. For my part, at least one new word has emerged to erode my peace of mind, even as it has raised my consciousness. In 2016, Oxford Dictionaries declared “post-truth” its Word of the Year.

“Post-truth” is a jarring word, encapsulating a disturbing, society-wide diagnosis that might only be addressed one hardened heart at a time. It describes circumstances in which personal beliefs and emotions trump objective facts, conditions we face every day. You may share my occasional reaction — a choked-up angst about the deliberations we’re conducting, the news and information we’re consuming and the “wisdom” we’re contributing to the common good. 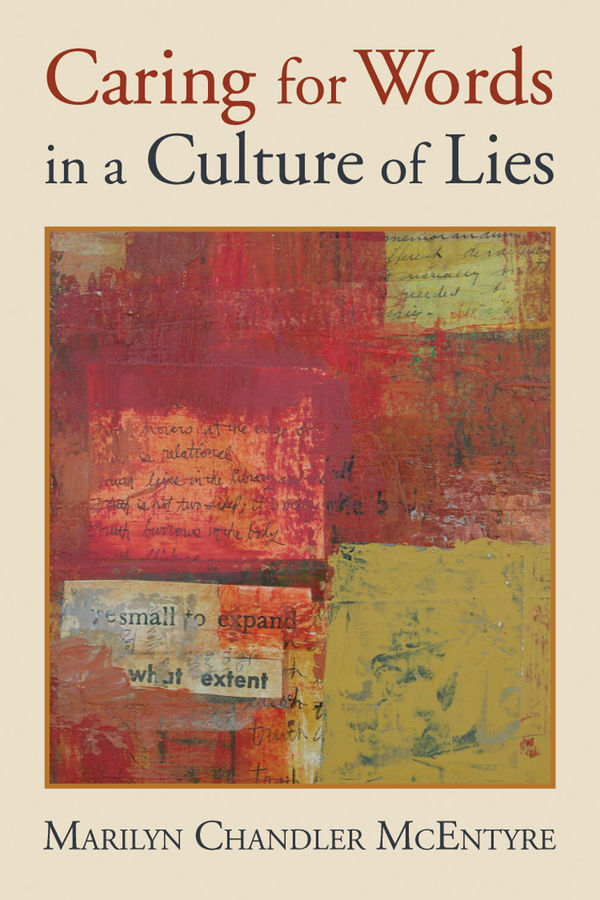 For better or worse, the journalist in me gravitates toward quandaries. Everything I’ve been reading lately indicates that our culture faces a big one. So I was grateful to encounter a balancing voice in Marilyn Chandler McEntyre through a radio interview earlier this year. She was discussing her 2009 book, Caring for Words in a Culture of Lies.

McEntyre’s book is almost too bubbly for the grim critique in its title, but her approach is exactly what I needed. She doesn’t downplay the hazards of trying to speak and write, to read and listen, in a “post-truth” world. Rather, she scales the problem down to a level that enables us to imagine a cure that should resonate with avid writers and readers alike — especially with us nerds who actually take interest in the word of the year.

A former professor of English at Westmont College, a Christian liberal arts school in California, McEntyre defends words as the currency for our sharing of truth. This is my kind of joie de guerre: Her battle plan is to recapture reality through the joyful stewardship of words, celebrating the human relationships that well-chosen words can foster.

Demonstrate with gusto your delight with words, conversation and storytelling, she advises. Help the world to appreciate silence and listening. Commit to everyday truthfulness. “This,” she writes, “is necessary and urgent activism.”

Can such seemingly simple strategies restore truth to language? I hope so. But I won’t question the validity of McEntyre’s communitarian insights. Her endeavors have included working with words in a life-and-death arena, teaching as a “professor of medical humanities” in the UC Berkeley-UCSF Joint Medical Program, which affirms it gives future doctors “a deep understanding of the social, behavioral and ethical aspects of medicine.”

As I delve further into McEntyre’s prescriptions, I’m preoccupied with her diagnosis of the sad state of words today. “The generation of students coming through high schools and universities now expect to be lied to,” she writes, arguing that they’ve been immersed in flippant banter, euphemisms, overgeneralizations and manipulative advertising. She decries “habitual verbal promiscuity” and imprecise communication styles “that make us careless and so make us care less.”

She reminds me of my pet peeve against those TV preachers who, in the name of promoting individual spirituality, decry “religion” as a pharisaical threat to one’s spiritual life. They may do collateral damage by tarnishing this word, “religion,” that dictionaries associate with ideas like belief, worship and bond.

McEntyre’s most stirring complaint covers words distanced from the complexities and paradoxes found in real-world interactions. “Like food, language has been industrialized. Words come to us processed like cheese, depleted of nutrients, flattened and packaged, artificially colored and mass marketed.”

Although McEntyre wrote Caring for Words in 2009, she illuminates today’s concerns about “fake news,” about the party-line punditry on cable TV, about the algorithms that stimulate our “engagement” through divisive defamation. Too many of the words now shaping our public mindset are formulated in private by strategists or social-media loners, conveyed by ratings-driven media and then proffered as weapons for battles most people don’t really want to fight.

Journalism has always been flawed, but in previous decades it focused more on ideas percolating up from discussions and pursuits in civil society — in “flyover” communities as well as in Washington. Engagement produced news, not vice versa. Past, present and future perspectives, together with local and national viewpoints, added context to the news when it didn’t have to be “breaking.”

I wonder whether McEntyre will come across Pope Francis’ 2018 message for World Communications Day on May 13. His reflections, titled “The Truth Will Set You Free: Fake News and Journalism for Peace,” dovetail with McEntyre’s view of words as

The pope, echoing themes of subsidiarity and human ecology, decries deceptive language that discourages civic participation and cooperation. Ultimately, he cautions, “the end-result of untruth” is hatred. He hits the mark when observing that “the heart of information is not the speed with which it is reported or its audience impact, but persons.” Words carry toxins when they’re manufactured in exclusive circles, rather than cultivated and harvested in the public square.

I can envision McEntyre and Pope Francis joining forces to help heal our post-truth generation. More realistically, we word-lovers who believe that reality will prevail might at least accept these inspirations to bolder activism. The summons is not really to a battle after all, but to a courtship with language that sows peace. Experience teaches us that words can lead to the breaking of bones, so we had better stop weaponizing communication. Caring for Words delivers some purpose-driven buoyancy to share and, when needed, something constructive to say.

William Schmitt is a freelance writer/editor who has written extensively on K-12 education, public affairs and Catholic values. He is based in South Bend, Indiana, and his website is OnWord.net.