For most of my life, a few proper nouns were supposed to satisfy my curiosity about World War II.

My high school history classes spent weeks on the Plymouth Colony, a few more on the American Revolution and even longer on the War Between the States. We ran short on time and had to scurry through World Wars I and II. If you could remember Pearl Harbor, Eisenhower, Churchill, Hitler and D-Day, you were five steps toward a passing grade. 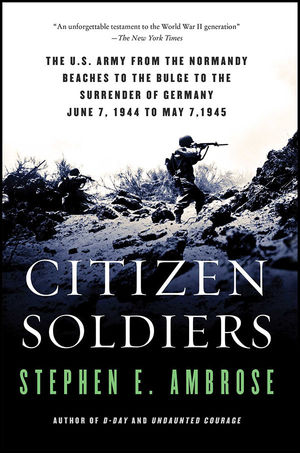 Yet in the 1960s, when I was a child, you couldn’t escape World War II stories on black-and-white TV or in the movies. My brothers and I patrolled the woods on our family farm, using corncobs as hand grenades and crooked sticks as Tommy guns as we looked for Germans among the pine trees.

My father had served in that war, barely out of high school when he accompanied anti-aircraft batteries to the border of Belgium and Germany. One day we built up the courage to ask him if he ever killed anyone. He had a two-word reply: “Not directly.”

And that was that.

My father’s final battle was against colon cancer. Before he died in 2001, he and I had many quiet conversations on his sunny back porch. At age 76, he still was tightly zipped about his war experiences, but on a rare moment these words would emerge, “I always wondered why the Panzers were still smoking when we reached the Autobahn.”

In the past year or two, I’ve also read segments from John Eisenhower’s Bitter Woods, Audie Murphy’s To Hell and Back and Studs Terkel’s The Good War. Any of these books — and, I suppose, hundreds of others written in the past 75 years — can serve as your guide to understanding.

John Eisenhower, the general’s son, is like an old-school football coach focused on the X’s and O’s, if you’re into the strategy of war. Murphy’s book likely was penned by a Hollywood mythmaker, if you like heroes. Terkel, as always, lets ordinary people talk, and we learn from our glimpse at their secrets.

Ambrose, who died in 2002, wrote about a dozen books about World War II, including six with Gen. Dwight D. Eisenhower as the central figure. “Citizen Solders” has power because most of us go through daily life more like privates or, at best, sergeants. If our personal war is to be won, it will be by the actions we alone must take.

In Ambrose’s book, ordinary folks are sent by generals to dangerous places, often with the wrong equipment. For example, after storming the beaches on D-Day, American soldiers found themselves in French farm country. They had plenty of Sherman tanks because factories back home had built more than 50,000 of them. But as they plodded down narrow, muddy farm lanes, the tanks were easy targets for German panzerfausts — bazookas, basically.

The hedgerows that lined the roads and provided cover for the Germans seemed impenetrable, so on-the-spot ingenuity was required. One driver, Lt. Charles Green, experimented by welding steel from broken railroad tracks onto the front of his tank so it could ram through those thick shrubs and engage the Germans in the open fields. Another method was devised by Sgt. Curtis Culin, who used scrap iron to fashion a mounted saw-toothed device to cut through the thickets. Culin’s vehicles became known as Rhino tanks.

As Ambrose describes it, these were young men who had been taught to use their wits to keep their farm equipment and delivery vehicles working back home during the Great Depression. They were not waiting for orders from HQ. They solved their problems on the fly.

But they also obeyed orders, even when they didn’t want to. Ambrose reports an interview with historian Joseph Balkoski, who studied the 29th Infantry Division and its fierce fighting near the small town of St. Lo in northwestern France. “The 29ers were humble men caught up in a war of immeasurable complexity,” Balkoski said. “Any soldier who could bring himself to leap over a hedgerow upon command and race, hunchbacked, across a grassy field while bullets snapped over his head like cracking whips was a brave man indeed.”

History focuses on generals. We remember names like Eisenhower, Patton and Bradley. Ambrose’s celebration of citizen soldiers – people like Green, Culin and the men of the 29th – reflects the truth that millions of crucial decisions were made along hedgerows and in foxholes by anonymous men.

Statistics might help us understand. According to The National WWII Museum, the United States had 1,100 generals during World War II. An estimated 16 million soldiers, including 11 million draftees like my father, served either domestically or abroad during the war. Of those, some 2 million risked their lives in the European war zone.

The basic pay for soldiers then was $71.33 per month. The primary purpose of those young men was not to get rich. It was figuring out a way to avoid dying.

Citizen Soldiers begins after the D-Day invasion, continues through the French hedgerows into the Ardennes forest — John Eisenhower’s bitter woods — and reaches its zenith at the monthlong Battle of the Bulge that started in December 1944.

The quick history lesson is that the German troops were losing ground daily, so Adolf Hitler came up with a desperate plan. If one final attack could puncture the bulge in the advancing Allied lines in Belgium, his troops could speed down highways toward major cities of Belgium and France. Then if the Allies held any hope of ending the war quickly, they would have to bargain for it.

At this point the book becomes real for me. My father was in an anti-aircraft battery near the center of that bulge. A German Panzer division headed by Lt. Col. Jochen Peiper was on the leading edge of the attack. Peiper’s troops had just massacred 84 American prisoners of war at Malmedy, and he had a reputation for ruthlessness.

When the Battle of the Bulge began in subzero temperatures, American troops were taken by surprise. They had no time to retreat. So the anti-aircraft guns, designed to shoot 90 mm shells almost 8 miles through the air, were lowered to horizontal to fire point-blank at approaching Panzers.

By disabling a handful of the tanks, these 19- and 20-year-old boys blocked a main road long enough for American troops to redeploy and prevent Hitler’s breakthrough there.

Elsewhere along the front, thousands of other young men bravely held their positions against the onslaught. The attack stalled and Hitler’s gamble failed. In the weeks ahead, hundreds of men continued to die, but Germany was in full surrender by May.

Ambrose does not speak as one who glorifies war. Neither did my father, nor will I.

As the author points out, if you believe the war’s outcome was determined with the success of D-Day, every death and injury after that was unnecessary. It was not their choice. His final words ascend: “At the core, the American citizen soldiers knew the difference between right and wrong, and they didn’t want to live in a world in which wrong prevailed. So they fought, and won, and we all of us, living and yet to be born, must be forever profoundly grateful.”