A football game happens right before our eyes, but when it’s over, ask the coaches who drew it up about this or that play and they often don’t have an answer. They have to look at the film.

That’s not always a dodge. There’s a lot going on out there. What appears to be an obvious mistake might actually be a scapegoat for a bigger error obscured in the scrum. We howl and point fingers, unconcerned about the relevant information we have no way of knowing. We don’t have to look at the film. Just the scoreboard. 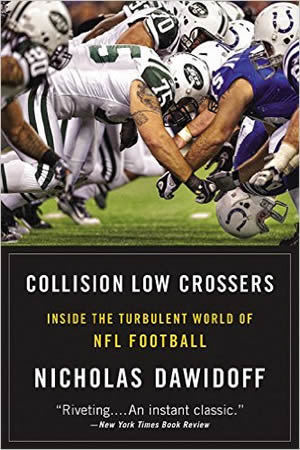 Without 18 hours a day to reverse engineer each play into its component parts, the results have to suffice as a means of evaluation. As it should be, since that’s the whole point of the labor-intensive process behind the scenes. We don’t care about the assembly-line grind that produced the car, just whether or not it runs.

Even though it is whether you win or lose that ultimately matters, how a football team is built provokes more curiosity than the process of tightening the bolts on a new Toyota. Author Nicholas Dawidoff helps satisfy that curiosity in Collision Low Crossers: A Year Inside the Turbulent World of NFL Football, a book based on his total access to the 2011 New York Jets.

He wanted to pierce the myth and mystery surrounding the sport that has long since displaced baseball as the national pastime but remains almost impenetrable. “Was there an activity that Americans paid closer attention to but knew less about?” Dawidoff asks. In his immersion, he came to understand that the public pageant of games “were brief interludes from the serious work of football life.”

With a parking space, security code and office at the Jets practice facility, he showed up every day to embed himself in that serious work. Dawidoff even called a couple defensive plays during a preseason game. Rex Ryan was then the team’s head coach and probably the only member of his paranoid fraternity who would allow such unfettered interloping.

The result makes readers vicarious flies on the wall at the NFL scouting combine, the draft, in-season meetings and practices. Games, in the book as in the sport itself, are brief interludes. Even the notorious New York media goes mostly unheard in this account from so deep within the team’s inner sanctum.

An average Jets team, which failed to make the playoffs with a disappointing 8-8 record after two consecutive appearances in the AFC title game, doesn’t diminish Dawidoff’s story. If anything, the mediocre performance enhances the sense of the slog that is an NFL season.

One long day bleeds into the next. Weeks blur. Collision Low Crossers depicts men single-mindedly charting a course through choppy seas, showing a regimented devotion to the drudgery of duty even after the planned destination has been wiped off the map.

Dawidoff thrives in revealing the people under the helmets and headsets — the precocious, mischievous quarterback Mark Sanchez, the consummate professional cornerback Darrelle Revis — and portraying their salty and esoteric jargon. They express respect by prank and insult, and spice their evaluations of plays and players with vivid terms.

Defensive coordinator Mike Pettine had so many idiosyncratic expressions that another coach and Dawidoff compiled a glossary: “Bloated tick” referred to an ineffective lineman; a tentative player had “glass in the shoes”; if you get hit so hard your head snaps back, you’ve been “Pezzed.”

The phrase “collision low crossers” itself comes with a definition on the book jacket. Collision, in this case, is a verb. And the term instructs defensive players to hit (or collision) wide receivers crossing the field within five yards of the line of scrimmage (the low crossers). Beyond five yards, collisioning them would be illegal.

These lessons in football-as-a-second-language are useful and often funny, but the book does not decode football’s riddles. Too many variables in personnel and game-planning make each snap a complex organism unto itself. Entire chapters probably could be devoted to individual plays.

Early in the book, Dawidoff says of football: “the significance of it all seemed to be that in an age of exposure, the thing Americans liked best operated in almost total seclusion.”

Collision Low Crossers is not a playbook, so the game keeps its secrets, but Dawidoff’s entry into that cloistered world offers insight into the players and coaches that helps armchair quarterbacks see more than the final score.