Ed Catmull’s credits, in the Hollywood sense, are sparse. “Miscellaneous crew” is the category where the president of Pixar and Disney animation studios appears most often on IMDb, the online source for that sort of thing. There is a lone directorial credit, for a University of Utah graduate school project, A Computer Animated Hand (1972). 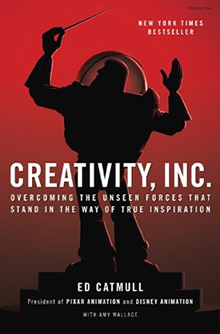 Exactly what the title suggests, the film depicts a hand — a computer-rendered image of Catmull’s left — making a fist and pointing, interspersed with text explaining how it was done. The rudimentary production debuted at a computer science conference and created a sensation. “Hand,” he writes in Creativity, Inc.: Overcoming the Unseen Forces that Stand in the Way of True Inspiration, “represented the state-of-the-art in computer animation for years after it was made.”

His Utah professor had said he appreciated his graduate students because they “didn’t know what was impossible.” Catmull’s short film redefined what was possible in an era of hand-drawn animation. And that’s pretty much been his job ever since.

As a boy in the 1950s, Catmull revered Albert Einstein and Walt Disney, harboring an ambition to blend science and art to make the first computer-animated feature film. With Toy Story in 1995, he achieved that. Although he helped develop the technology on that groundbreaking production and all the Pixar blockbusters that followed, he was, for want of a better term, management. Miscellaneous crew.

Yet from his perch atop both Pixar and Disney animation, Catmull may be the most successful modern movie mogul. Pixar movies — the Toy Story series, Monsters, Inc., Ratatouille, The Incredibles, WALL-E and Up — were modern heirs to Disney classics even before the corporate behemoth, struggling to recapture its cinematic glory, proposed a merger that went through in 2006.

Pixar’s customary creative and commercial success carried over to Disney, like magic, with Tangled and Frozen. So, how do they do it?

Well, it’s complicated — creativity and leadership are notoriously know-it-when-you-see-it concepts that defy explanation, but in Creativity, Inc., Catmull comes across as a genial sage, exploring the question rather than making proclamations. The Walt Disney in him believes the technology he advanced should be applied only in the service of storytelling. Toy Story’s pioneering computer animation was an afterthought in reviews more taken with heart-tugging story. He loved that.

Catmull also has an appealing aversion to slogans. “Story Is King” proved to be a hollow mantra during the disastrous — but eventually rescued, to great acclaim — production of Toy Story 2. Back then, Pixar’s top people thought that was a defining phrase but came to realize that everybody says that kind of thing. How, they asked themselves, do you live it?

Here are a couple ways Pixar tries: A group called the Braintrust emerged from meetings of its top creative minds, evolving into a regular review board for movies-in-progress. Directors present rough cuts to the Braintrust, receive pats on the back for their vision and ambition, then endure a barrage about everything wrong with the movie. As Catmull sees it, there should be a lot wrong with them, especially early in development — nothing original and authentic can emerge otherwise — but directors have to be open to the constructive criticism.

Attention to the tiniest details is another Pixar hallmark. Crew members on Ratatouille visited kitchens of Paris restaurants and the city’s sewers to render the most accurate depiction of the protagonist rat-chef’s world. For Monsters University, they traveled to MIT, Harvard and Princeton. Finding Nemo research involved scuba certification.

These rules of engagement have exceptions, and Catmull relates some, but he doesn’t necessarily make clear what distinguishes different situations. Most of the time, directors are allowed to continue, indefinitely, through a dark tunnel of uncertainty toward a movie’s completion. Sometimes, though, a lack of progress requires changes at the top.

And Catmull, who wanted animators to see first-hand the way a Parisian chef’s arms moved while cutting vegetables, let a chronological problem in Up go unaddressed. “We’ve found over the years that if people are enjoying the world you’ve created, they will forgive little inconsistencies,” he writes, “if they notice them at all.” In the case of Up, nobody did.

Those may be examples of the inexplicable, know-it-when-you-see it side of the process, and the company’s success justifies just about any decision. It also shows that, for all the technological mastery and precision tuning of Pixar movies, their real magic is the depth of human emotion conveyed through toys, bugs, monsters, robots and rats.