For the past few years, I’ve noticed an increasing amount of public worry about distraction. Everyone, it seems, is distracted at work. And these days, of course, it’s not just meetings and email — it’s the Internet and social media and a whole suite of digital tools that were supposed to empower us but mostly serve to shorten our attention spans.

Books, articles and blog posts all tell the same story. Technology is rewiring our brains for distraction. It turns out we can’t actually multitask, so we end up juggling tasks poorly. We live in our inboxes. We’ve become addicted to interruption. 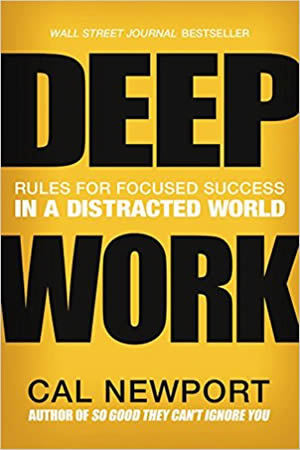 Most of this coverage, year after year, focuses primarily on outlining the problem. The incessant craving for new notifications. The addled brain, increasingly incapable of longform thought, seeking the dopamine drip that comes with shiny new pings. The hyperconnected, hyper-responsive self: more squirrel than Homo sapiens, hobbled by an instinct for new information that once ensured survival but now so often ensures nothing more than a restless dissatisfaction.

All fair enough. But what would an alternative vision actually look like these days?

Cal Newport has a compelling answer. His latest book, Deep Work: Rules for Focused Success in a Distracted World, skips the hand-wringing and instead provides a way forward. Rather than scolding us, as so many others do, about why distraction is bad, he explains why and how its opposite — deep work — is good.

I’m inclined to listen to Newport because he practices what he preaches. An associate professor of computer science at Georgetown University, he frequently publishes papers in his field. He’s also written five books, all focused on how to better study or work in today’s world. And he maintains a blog that attracts readers who discuss his work. So it’s fair to say he’s as much practitioner as theorist. And lest you think he’s a workaholic, he’s able to do all this, by his own admission, in relatively normal working hours. By 5:30 p.m. or so, he’s done for the day and is ready to spend time with his young family. So he has my attention.

Newport describes deep work as “professional activities performed in a state of distraction-free concentration that push your cognitive capabilities to their limit. These efforts create value, improve your skill, and are hard to replicate.” Deep work stands in contrast to the shallow work — nondemanding, easily replicated — that can fill up so much of your career if you let it.

He argues that deep work is valuable and rare. It’s valuable because it helps you quickly learn difficult things and produce at an elite level — skills that are in high demand in today’s economy. At the same time, deep work is becoming rare in a culture of connectivity where being busy can too often become a substitute for being effective. So from a purely practical perspective, he argues, you will benefit by cultivating deep work as a skill and building your career around it.

But it’s not all ruthless pragmatism. Importantly, Newport says, deep work is also meaningful. He explores the work of a modern-day blacksmith who hammers out swords in an open-air barn, deriving intense satisfaction from an arduous pursuit. In addition, he draws on neurological, psychological and philosophical insights to discover that the pursuit of depth by itself produces a rich fulfillment that can allow you to discover a sense of the sacred. Think of it as the craftsman’s ethos applied to the modern world of knowledge work.

This is a vision I find compelling. It may be what I’ve been looking for every time I’ve clicked my way to yet another article about focus and distraction. I can certainly appreciate its practicality. After all, who doesn’t want to spend more time doing high-value work, and doing it well? And for those who are interested, I invite you to enjoy the book for yourself. It’s a quick read at under 300 pages, and much of it details practical hacks for cultivating deep work, from carving out time for undistracted focus and embracing boredom, to avoiding social media (I know, it’s never going to happen) and minimizing busywork.

Ultimately, Newport’s vision resonates with me because of its focus on finding meaning in work through craftsmanship, no matter the job. This way of thinking — that your thoughts help create your reality — has found various expressions. You may have heard that, to a great extent, your outlook, not your circumstances, determines your satisfaction. If you’re explored meditation, you may have noticed that mindfulness can improve your experience without changing anything concrete in your environment. If you’ve read Martin Luther King Jr., you may appreciate that someone who cleans for a living can approach that job with the same reverent intensity that Michelangelo, Beethoven or Shakespeare brought to their crafts.

Newport certainly understands this, and he unpacks it in one particularly telling passage.

“Throughout most of human history, to be a blacksmith or a wheelwright wasn’t glamorous,” he writes. “But this doesn’t matter, as the specifics of the work are irrelevant. The meaning uncovered by such efforts is due to the skill and appreciation in craftsmanship — not the outcomes of their work. Put another way, a wooden wheel is not noble, but its shaping can be. The same applies to knowledge work. You don’t need a rarified job; you need instead a rarified approach to your work.”