Making my way through Jon Meacham’s engaging new biography, Destiny and Power: The American Odyssey of George Herbert Walker Bush , my mind keeps returning to an article I read about the former president. The October piece in The New York Times portrayed a frustrated Bush, helplessly and obsessively watching Fox News and the Republican primary debates as his son Jeb found himself upstaged and out-polled by a candidate whom the elder Bush regarded as unworthy of the presidency. 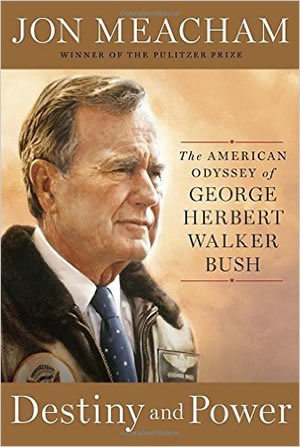 It’s been more than six months since that article was published, but it feels longer. Jeb Bush exited the race in February after failing to win any of the early primaries. And as I write this on Monday, May 2, from my front porch overlooking Michigan Street in South Bend, Donald Trump is scheduled to speak this evening just a mile down the road to a crowd of roughly 12,000 at the Century Center. Tomorrow, he’ll likely win Indiana’s GOP primary by a wide margin, propelling himself even closer to securing a nomination Bush and so many others refused to believe he could actually attain.

Reading Meacham’s book, it becomes clear why Bush would find Trump’s candidacy so repellent. On the surface, the two men have some things in common. Both came from wealthy, successful families in the Northeast and attended elite academic institutions. Both followed their father’s career paths, becoming even more successful. Both have held a strong conviction that they were meant to achieve and to lead. And both for years eyed the presidency as their ultimate calling.

Yet the portrait Meacham paints of Bush, informed by an incredible amount of access to the former president, his aides and family members, and the diaries he kept throughout his life, differs from Trump in a crucial way. Despite an intense competitive streak and grand ambitions, Bush also possessed the modesty and humility that today’s GOP frontrunner lacks. Whereas Trump shamelessly touts his own greatness and gleefully insults his rivals and critics, Bush often felt uncomfortable expressing what he deeply believed for many years: He was the best and most qualified man to lead the country.

Meacham demonstrates how this element of Bush’s character was passed down from his ancestors by tracing the family’s long history in the United States. In 1889, a eulogy for James Smith Bush, the future president’s great-grandfather, contained this line: “Interested in all public questions, possessing strong opinions, and having the courage of his convictions, he never was offensive or aggressive in asserting them.”

Growing up in Greenwich, Connecticut, Bush and his siblings were raised to compete and to win but to do so humbly and gracefully. At Andover, the prestigious New England prep school, Bush distinguished himself on the baseball field and, eventually, in the classroom but seemed most recognized for his kindness.

These traits remained on display throughout his adult life, from his military service in World War II to his success in the oil business and eventual rise to prominence in government. His character was reflected in his approach to politics. Writing about Bush’s first, unsuccessful run for the White House in 1980, Meacham says: “Bush acknowledged that he was neither wonk nor ideologue. He saw politics more in terms of consensus than of ideology. One ran for office — and did what partisanship required to win elections — in order to amass power to serve the larger good. For Bush, the work of government was less about radical reform than it was about careful stewardship.”

Meacham’s book is, of course, about more than Bush’s character and how it influenced his political career. It also tells the story of the second half of the 20th century in America through the lens of a man who was involved in so many pivotal moments, from World War II and Watergate to the age of Reagan and Bush’s own White House years.

And when he finally did win his party’s nomination in 1988, Bush’s speech at the GOP convention called for a “kinder, gentler nation.” I wouldn’t expect to hear a similar notion in Cleveland this summer if Trump is the nominee.

I won’t be there to see the Republican front-runner put on quite a show in South Bend, either. Instead, I’ll sit a mile away on my porch, thinking about a humble, dignified man who left office 23 years ago.