I could call Beth Macy’s Dopesick: Dealers, Doctors, and The Drug Company That Addicted America a scathing indictment of Big Pharma, which it is, but it is so much more than that. It is a tour de force of journalistic writing that takes a complex subject, the opioid crisis, and makes readable sense of the entire public health disaster.

Two days after I finished reading Dopesick, a story in the South Bend Tribune reported on “the prevalence of synthetic opioids that experts believe is behind overdose deaths totals for 2017 hitting record highs.” Along with oxycodone, those synthetic opioids include fentanyl and heroin. The numbers in the article were disturbing: “In the United States, about 72,000 died of overdoses last year, a 10 percent increase from 2016.” 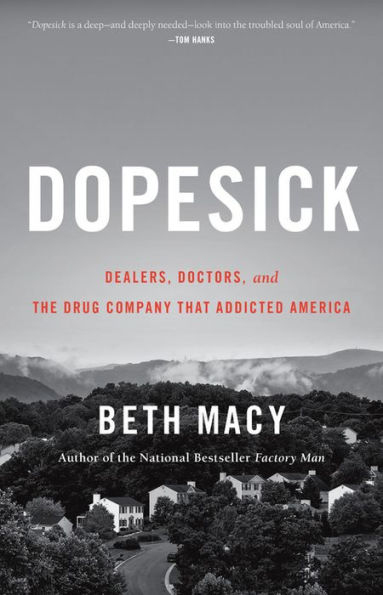 Macy, author of national bestsellers Truevine and Factory Man, could have said, “I told you so.”

Pairing the often-heartbreaking stories of those involved — users, bereaved family members, drug dealers, activists, police officers and politicians — with the astonishing numbers of prescriptions written for high-powered painkillers and the attendant deaths, Macy opens readers’ eyes to the deadly trail of OxyContin. The powerful opioid was released in 1996 by the pharmaceutical company Purdue Pharma, based in Stamford, Connecticut.

“Purdue Pharma touted the safety of its new opioid-delivery system everywhere its merchants went,” she writes. “Iatrogenic (or doctor-caused) addiction, in the words of a 1996 training session for doctors, was not just unusual, it was ‘exquisitely rare.’”

Not so. In 1997, the “tsunami of misery” began. Working in Virginia in those days as a reporter for The Roanoke Times, Macy lived near Central Appalachia, the epicenter of the opioid epidemic. She “witnessed the rise in overdose deaths spread north along I-81 from Roanoke.”

As the South Bend newspaper reminded me, the problem has only gotten worse.

The evolution of the epidemic, Macy writes, may have started with doctors overprescribing OxyContin to people living in depressed areas, but from there “the scourge not only advanced into new territories but also arrived via a different delivery system as the morphine molecule shifted from OxyContin and other painkillers like Vicodin and Percocet to heroin, the pills’ illicit twin, and, later, even stronger synthetic analogs.”

Dopesick is full of questions, because the subject itself is so complex. Are children who take stimulants for attention-deficit disorder more vulnerable to addiction to other drugs later in life? What about the easy availability of Ritalin and Adderall on college campuses? Was the Food and Drug Administration complicit in continually allowing Purdue Pharma to manufacture high doses of OxyContin, even in the face of its addictive properties? And where is the public health strategy for treating the addicted?

One particular question that drove Macy’s reporting and writing came from a tearful family friend, whose daughter had become an addict: “What can your book do to help me keep my daughter alive?”

The powerful stories Macy tells of the hard work done by distraught family members and activists, who at first asked that OxyContin be regulated and now call for more and better rehabilitation programs, offer only a small glimmer of hope for Macy’s friend.

Macy ends the book with a death, one of many in this disconsolate tale of corporate malfeasance, political failure, personal misery and despair. Despite its bleak take, Dopesick is essential reading for those who want to understand this national crisis.

Carol Schaal retired as managing editor of this magazine in autumn 2017. She has since turned her attention to fiction and is editing her debut mystery novel.