The final straw came last fall after the election.

A neighbor was telling me that Obamacare needed to be repealed because hundreds of thousands of Syrian refugees who have refused to learn a single word of English are overrunning hospitals with demands for free, elective medical procedures that the rest of us hard-working taxpayers cannot afford.

I grew up in a household, the youngest of four brothers, where spirited disagreement was common. Any topic was likely to set off a fierce debate. Bart Starr or Johnny Unitas? The Beatles or the Rolling Stones? Hot dogs or hamburgers?

I thought I could argue about anything anytime with anyone, but I found I am ill-equipped to speak with people like this guy. It’s like trying to climb Sears Tower using only your fingernails for grips — painful and impossible.

How on earth did we come to this? Why can’t two adults speak, listen and learn from each other? 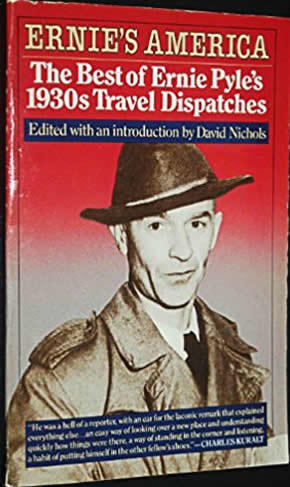 When the world is confusing, I seek clarity in books and movies. The film that came to mind was Spike Lee’s Do the Right Thing. In this 1989 movie, key characters stick stubbornly to their own moral code, and the result is death and destruction.

Next up were the writings of Hunter S. Thompson, particularly his coverage of the Nixon-McGovern presidential race of 1972. This is the quote I was seeking: “This may be the year when we finally come face to face with ourselves; finally just lay back and say it — that we are really just a nation of 220 million used car salesmen with all the money we need to buy guns, and no qualms at all about killing anybody else in the world who tries to make us uncomfortable.”

That, basically, tells me we’ve been here before. You can take it as a positive — at least we survived our last love-it-or-leave-it phase. Or it’s a negative — we didn’t learn anything the last time.

Ultimately, my search led back to a familiar place, Ernie’s America: The Best of Ernie Pyle’s 1930s Travel Dispatches, a book I’ve had since 1989. It is a compilation of on-the-road newspaper columns written by Ernie Pyle between 1935 and 1942. The book was edited by David Nichols, a colleague from the beginning of my own newspaper career in Fort Wayne, Indiana.

I re-read the Pyle columns for many reasons. First, he was an outstanding writer who saw the story inside a person other people might ignore. For example, Ernie’s America introduces us to J.W. Hickey, a roadside fur trader in Ozone, Tennessee. We meet another Tennessean who began life as the slave of Andrew Johnson, the eventual U.S. president after Abraham Lincoln.

Like a lot of us, Pyle was curious. He had heard times during the Great Depression were even worse in farm towns. That led him to Garden City, Kansas, and this pronouncement, “If you would like to have your heart broken, just come out here. This is dust-storm country. It is the saddest land I’ve ever seen.”

During those hard times, Pyle introduced people who didn’t complain, who kept their dignity. We meet Charlie Yeager, whose job was to dive under the ice of the Detroit River to recover bodies of people who committed suicide. “He has a happy face, and a gold tooth, and short iron-gray hair. He finds life on the whole pretty good,” Pyle wrote.

Pyle was a man who listened to his mom. An evangelist had been making the rounds with the story that Chester Bedell of North Benton, Ohio, on his deathbed, had challenged God. If the Lord exists, he should prove it by putting snakes on my grave, Bedell had said. Ever since, the evangelist claimed, you couldn’t stand near the tombstone because of all the writhing snakes.

Pyle’s mom didn’t believe the story and asked Ernie to go to North Benton to see if it was true. He did. It wasn’t.

“There are no snake holes in Chester Bedell’s grave,” he wrote. “I’ll bet there isn’t one snake in five years that crawls right over the grave.”

Why do we believe Ernie Pyle? Part of it is the tradition of the times. If you heard it at the barbershop or at a church social, it was just a story. It became the truth when you read it in the newspaper.

Pyle also earned his credibility because he saw things with his own eyes. He reported what he knew, without embellishment. Spike Lee dreamed up his characters. Hunter Thompson turned real people into cartoons. Sometimes the unvarnished truth is what is needed.

I have this hope that if Pyle were still around, he might help me look for those hundreds of thousands of Syrians getting free tummy tucks and breast enhancements. I hope my neighbor would believe him. I just don’t have the words.