At Notre Dame athletics has always been a very big deal. And Games the Irish Play: The History of Non Varsity and Recreational Sport at the University of Notre Dame is a very big book, providing a thorough history of nonvarsity and recreational sports at Notre Dame, from 1842 right up to the present. 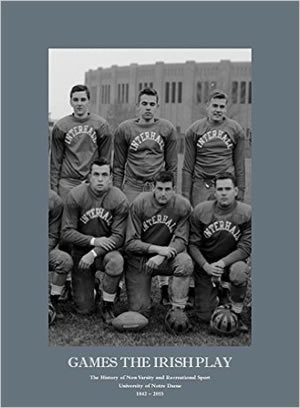 It’s as big a book as you’re likely to see. Tall and wide and thick. Full of big photos and engaging storytelling, interesting facts and an abundance of information. It’s an archival tome, a book of records and a pleasure to peruse.

It also represents 10 years of research, dedication and labor on the part of its creator, author and compiler. That would be Dave Brown, who has served as the assistant director of Rec Sports for the past 17 years (having come from the U.S. Naval Academy, where he was an associate professor and a Collegiate Squash Association Hall of Fame coach).

During his time at Notre Dame the number of club sports has grown from 11 to 41 clubs, now with 1,200 members traveling 100,000 miles and spending $800,000 annually. That does not include all the other recreational endeavors, intramurals and fitness classes that once prompted Sports Illustrated to liken the Notre Dame campus to an Olympic training center.

To Notre Dame students, sports is a very big deal. They have always loved their games.

Brown concurs. “Sports crazes come and go; new trends have their moment, and are replaced. But the love of students to play sports together remains a constant. There is no perceived difference in enthusiasm or skill among the generations who have contributed to the recreational history and lore of campus. And the philosophy that governs recreational pursuits at Notre Dame remains true to its roots. Fair play for the enjoyment of the sport is ingrained as the overriding concept. Good sportsmanship is the keystone of competition, recreational or otherwise at Notre Dame. Life’s lessons learned through recreation are as valuable as any classroom education.”

So we read about students participating in ultimate Frisbee and disc golf, rock climbing and water skiing, fly fishing and skimming through the National Synchronized Skating Championship. We read about Bookstore Basketball, interhall football, the equestrian club and Bengal Bouts. Curling and hurling. And we are reminded of Father Lange’s gym and Badin Bog, and that Domers played water polo in 1894 and lacrosse in 1895.

Notre Dame’s founder, Rev. Edward F. Sorin, CSC, valued the importance of exercise in developing the whole student and placed great emphasis on play, sport and recreational facilities for boys in the minim program, prep and college levels back in the 19th century. St. Edward’s Day — also called Founder’s Day — was celebrated each year with sports and games and competitions. In 1873 events included baseball and football games, foot races, bag races, jumping matches and a rowing regatta on the campus lakes.

Baseball became a club sport at Notre Dame in 1865, and the following year more than 150 students were playing on seven teams. One of those boys playing on the schoolyard was Adrian “Cap” Anson, who would play 21 seasons with the Chicago White Stockings (renamed the Cubs in 1903). One of the game’s first stars when the National League formed in 1876 (widely recognized as the beginning of Major League Baseball), Anson amassed 3,081 hits with the White Stockings. He was one of the 26 original members of the Baseball Hall of Fame and still ranks third on the all-time RBI list, behind only Hank Aaron and Babe Ruth.

The book is full of many similar interesting tidbits of information and photos. Check out, for example, Paul Hornung with his Kentucky Club teammates when they won the interhall basketball championship in 1954; the “natatorium” in the 1890s; Boat Club members from that same era, posing with their oars and longboats.

In March 1899, the University dedicated a new gym, hailed by Scholastic as “one of the largest college gymnasia in the United States that is devoted solely to athletics.” Students practiced baseball and football there, played handball and basketball, tennis, gymnastics and “bicycle riding.” Such support of campus-wide athletics was “a novel concept in education at the time.” The facility burned down 21 months later.

The book also takes a deserving look at the rise of women’s sports and sports played at the intramural and club levels before achieving varsity status — although many have not. “Cricket,” Brown observes, “is noteworthy if for no other reason than it was the first club introduced at Notre Dame, established in 1862.” The game then disappeared from campus for more than a century until its revival in the 1990s, with Joydeep Ganguly ’00M.S. as the club’s standout player.

The book is dedicated to Rich O’Leary, who for 38 years, writes Brown, “was the heart, the soul, and the embodiment of RecSports,” and offers forewords by the legendary Rocky Bleier ’68 and George Dohrmann ’95, who won a Pulitzer Prize and is now a senior writer with Sports Illustrated.

There’s a lot of ground to cover in this book of epic proportions, which is available at Gamestheirishplay.com and elsewhere.