It is 1:17 a.m. I should have stopped reading hours ago. I am not supposed to be awake, smiling like I just completed a mad dash, cross-country road trip without a second to spare. I should be asleep in preparation for an important sales call early tomorrow morning, er, today. But, thanks to I Don’t Care If We Never Get Back: 30 Games in 30 Days on the Best Worst Baseball Trip Ever (Grove Press), Ben Blatt’s and Eric Brewster’s madcap, hilarious and compelling nonfiction account of their June 2013 attempt to attend baseball games at all 30 major league ballparks in 30 days, I am cheering, not snoring.

Blatt, a math maven whose love for numbers is surpassed only by his devotion to baseball, built a computer algorithm during his senior year at Harvard to see if such a road trip could be accomplished. Brewster, his best friend whose appreciation of history and storytelling rivals his boredom with baseball, agreed to join him in the lunacy “to see America.” But, in almost cinematic perfection, both recent grads got more — and less — of what they expected, learning lessons and growing as people in the process. 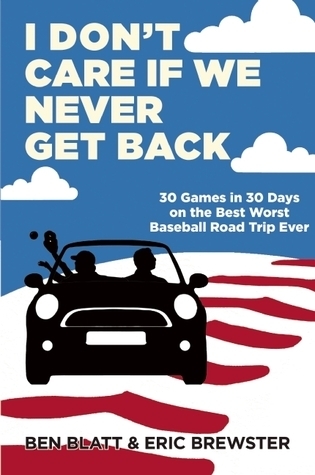 Full disclosure: I learned about I Don’t Care If We Never Get Back while researching my own sports road trip book. On September 5, 2013, I embarked on “Sports Year,” my attempt to attend 365 sporting events in 365 days in all 50 states. When writing a book proposal, an author must explain to publishers what similar books exist and how his/her project will differ. For mine, I smugly dismissed Blatt’s and Brewster’s efforts as focusing on just one sport while merely covering 1/12th of my duration. I owe those dudes an apology. Their logistical gymnastics made my head spin and my buttocks ache (sympathy pains from the routine 16-hour days in their Toyota RAV4). Although I am not a father, my paternal instincts kicked in as I worried myself sick for these nut jobs.

Blatt’s maniacal focus on his rules — see the first and last pitch of every game — force them into humorous yet hazardous situations as they race from city to city. For Brewster, this means he will not get to see the Grand Canyon. Or the town in West Virginia where his mother grew up. “Eric, WHY THE HELL DID YOU GO ON THIS TRIP?” The question seems obvious at the beginning of the narrative and looms larger as their psyches — and the car — wear down from the punishing trip. But, the reader sees before either of the guys do that Brewster is the ultimate wingman, going along for the ride to support his buddy’s dream.

Not surprisingly from veterans of the Harvard Lampoon, the famous launching pad for stars of comedy and literature, Blatt and Brewster deliver chuckles on every page. On the Atlanta Braves’ ballpark: “Turner Field, the stadium that billionaire owner Ted Turner decided to name after Ted Turner, was perfectly boring.” In a motel, Eric and a third buddy grab a much-needed cat nap, “But Ben couldn’t sleep. He had PTSD if PTSD could be diagnosed for things in life that did not matter.”

Friends and parents jump in the car for extended legs of the journey, providing a burst of energy and entertainment. Favors are called in, pranks are pulled, exits are missed and speeding tickets are earned.

The book’s title derives from a lyric in “Take Me out to The Ballgame,” the song sung during the seventh inning stretch at every MLB contest. But the guys learn that half the ballparks’ Jumbotrons display “never” and half display “ever.” This prompts a funny and insightful discourse highlighting why these guys make terrible and perfect travel partners. Baseball is often referred to as a father-son bonding experience, but the authors end up realizing the sports is pretty good for friendship, as well.

I heartily recommend I Don’t Care If I Never Get Back, especially for people who contemplated catching a baseball game or taking a road trip this past summer but did not. After reading Blatt’s and Brewster’s terrific travelogue, you’ll be itching to fill up the gas tank and buy a “#1 Fan” foam finger.

Jamie Reidy is an author and screenwriter in Manhattan Beach, California. His latest book is A Walk’s As Good As a Hit: Advice/Threats from My Old Man.