I had an idea of what to expect from the memoir of lifestyle expert Clinton Kelly. After all, the co-host of The Chew and the beloved but no longer with us What Not to Wear makeover show is known for his sass and sarcasm. As the title of his book attests, he’s not about to give readers a stale take on various topics, from childhood dreams to adult pursuits.

What I also found, however, was a genuine sweetness sprinkled through the snark. Kelly, it becomes clear, doesn’t hate everyone — and when he talks about his stepfather, sister, husband or the fans of What Not to Wear, his regard is touching. The graduate of Boston College and Northwestern University’s Medill School of Journalism even offers some advice based on what he gleaned over nine years on What Not to Wear, what he sees as the sad fact that women keep competing with and comparing themselves to others, a game with no winners. “Start focusing on you . . . your power, your value, the stuff that goes way deeper than designer jeans and the perfect shade of lipstick,” he writes. 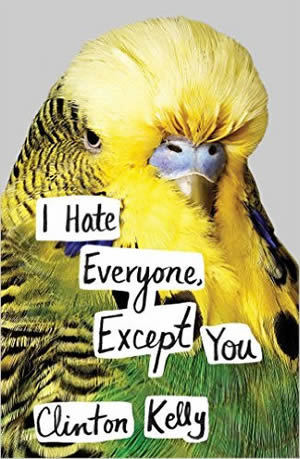 But never fear, for the TV host also can make you smile with his slings and arrows — he’s looking at you, Paula Deen. And a word nerd like me appreciated the fact that he likes to correct people’s bad grammar, if only in his head. His grammar fixes even extend to the dialogue in pornographic movies; in one of my favorite essays, Kelly offers a droll dissection of the genre’s earlier days when the raunchy movies had what passed for plots.

His vitriol is most obvious and also most justifiable when he discusses the way far too many people treat waiters. Kelly was a waiter in his younger years, and the experience still gives him nightmares. In fact, he thinks all citizens should be assigned two years of “mandatory restaurant work, which will result in a more kindhearted society overall.” As he says, “If we’re all concerned that tomorrow we may be the one treated like the lowly pissant, smiling like a lunatic for a 15 percent tip, we will all behave more civilly today.”

As Kelly hopscotches through various times and topics, for the memoir does not present a chronological view of his personal history, he’s open about his life as a gay man and various aspects of gay culture. Some readers will find his talk of R-rated exploits a definite reason not to read the book, others may appreciate his take on some of the more outlandish behaviors he discusses. For instance, the firm believer in fairness, “probably my most fervent core value,” has a difficult time with certain lifestyle choices.

He’s also fully aware that some individuals object to him as a gay person — and they will happily use social media to let him know this. But Kelly isn’t writing a poor, poor, pitiful me book — although, like many finding those middle-age wrinkles, he’s despairing of the signs of aging — nor is he trying to change the minds of those who warn him that he’s going to hell.

Instead, in I Hate Everyone, Except You, Kelly is sharing his public persona in a take-me-or-leave-me series of essays. He does, however, ask his grandmother for forgiveness “for all the foul language” he uses.

Carol Schaal is managing editor of Notre Dame Magazine. She previously wrote a What I’m Reading blog on Stacy London’s The Truth about Style. Email her at schaal.2@nd.edu.