Still, I was at the library book sale recently and paid a dollar each for Special Deluxe, by Neil Young, and Ringo: With a Little Help, by Michael Seth Starr.

And then, for Christmas, Bruce Springsteen’s Born to Run and Robbie Robertson’s Testimony showed up under the tree. Obviously, I’ll have several months to immerse myself in memories of the music scene from the 1960s and ’70s.

If you’re into this sort of thing, and I am, it’s a fertile field. Last year, I read books by Linda Ronstadt, Rod Stewart, Pete Townshend of the Who and Ray Davies of the Kinks. In the past couple of years, I’ve been through extensive books either by or about Bob Dylan, Elton John, David Bowie, Paul McCartney, John Lennon, Mick Jagger, Bill Wyman, Keith Richards, Graham Nash and David Crosby, among others.

Frankly, most of them are disappointing.

It shouldn’t be so. If a person can write songs that stay in your head for 50 years, shouldn’t they be able to write a decent book?

The sins are not all the same, but there is a recurring theme. The writers have no idea who I am and, other than the money involved, don’t know why they’re writing a book.

For some, it’s like they’re writing a college textbook. They second-guess the order of songs on Sgt. Pepper’s or Goats Head Soup, or they obsess over the special tuning required for one of Townshend’s guitars. For others, it’s often a monotonous gossip fest. Townshend and Stewart, in particular, give way too much detail on the parade of nearly identical women they fall in and out of love with. Love at first sight is a wonderful thing, if it happens only once. If it’s chronic, it’s a boring character flaw.

I can’t speak for all readers, but my need from biographers is simple: Make a human connection with me. Did Rod or Ringo grow up like I did, wondering what life would be? Was it just a stroke of luck that Pete and Keith picked up guitars instead of a basketball? Do they think like I do, dream like I do, worry like I do? A good book is about the reader, not the writer. 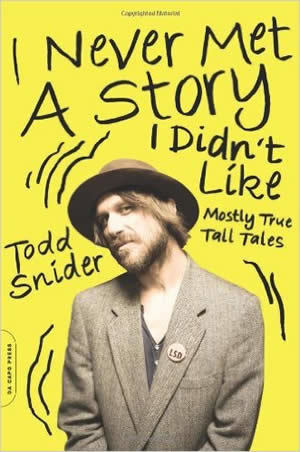 And tell me a story while you’re doing it.

I’ve heard good things about the Springsteen and Robertson books, but for now I can wholeheartedly recommend only one autobiography: Todd Snider’s I Never Met a Story I Didn’t Like: Mostly True Tall Tales.

Snider is a cult hero of sorts on the fringes of the music business. You can see him for $25 or so a seat at places like the Acorn Theater in Three Oaks, Michigan. He’s never had a huge hit; “The Devil You Know” might be his best known song. Most people have never heard of him, and that doesn’t seem to bother him.

He’s been the opening act for bigger stars, including Jimmy Buffett and John Prine. Some of that you can read about in the book.

Mainly, though, he’s a guy who connects with his audience.

Here’s an example of how he writes about the Daily Planet, a bar in Memphis, Tennessee:

The tide turned for me when I made up a song called “My Generation, Part II,” which talked about all the good things people my age were contributing: “Here’s to drum machines, stonewashed jeans, credit cards, fax machines. Big bow-headed chicks and frat guys wearing forty-dollar tie-dyed T-shirts,” was part of it.

See, I was being sarcastic.

But people liked that song, and they started filling up the nine-table area near the stage. So now there’d be forty people there. Before that song, the Planet was a bar gig. After that, it was a listening room where people would come and pay attention and sometimes leave tips for me.

My dad left tips, as well.

“You’ll still be doing the Planet when you’re eighty,” he said. And I was thinking, “God, if I could only be so lucky.”

Snider has moved on to bigger places but still seems surprised when things work out. His book moves you from place to place as he gets hired and fired by Jimmy Buffett, bar-hops with Jerry Jeff Walker, plays golf with Willie Nelson and takes way too many drugs.

His writing is honest and straight-forward, almost confessional. I often found myself shaking my head and thinking, “Todd, this isn’t going to end well for you.” And, of course, it doesn’t.

But, hey, I can’t stay mad at him. Thanks to his writing style, if our roles were reversed, knowing what he knows, I would be making the same bad choices. God, if I could only be so lucky.