Many of us at some point daydream about trading in the urban/suburban rat race for rural or small town life.

Christopher Ingraham and his family actually did it. And lived to tell the tale. 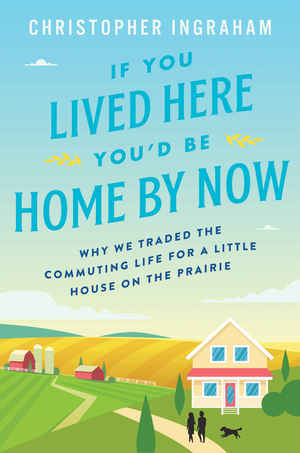 It all started in the summer of 2015 when Ingraham, a data reporter at The Washington Post, wrote a quick news story based on a dataset project of the U.S. Department of Agriculture. The database ranked every county in the lower 48 United States on six measures — including average temperatures, amount of sunshine, topographical variation and water features — to determine its status as a place to live.

Ranking dead last on the combined measures was Red Lake County in northwestern Minnesota, which Ingraham jokingly referred to in his article as “the absolute worst place to live in America.”

The article posted online. Two minutes later, the rebuttals started pouring in from Minnesotans, who didn’t take kindly to the writer’s conclusion. As a follow-up, Ingraham — who had never set foot in Minnesota — agreed to visit Red Lake County and its seat, Red Lake Falls.

He recounts the experience and his subsequent major life change in his thoughtful and entertaining book, If You Lived Here You’d Be Home by Now: Why We Traded the Commuting Life for a Little House on the Prairie.

Visiting “the worst place to live in America,” Ingraham discovers the residents are friendly and welcoming. Traffic jams are nonexistent. The rural scenery is beautiful and relaxing.

It’s 1,400 miles and a world away from suburban Baltimore, where he and his wife, Briana, and their toddler twin sons live in a pricey 952-square-foot row house with one bathroom. Ingraham commutes about 15 hours a week to work in Washington and his wife has a demanding administrative job with a governmental agency. They’re not sure they’ll ever be able to afford a real single-family home or to live closer to work.

You know where this is going. Before you can say “Green Acres,” the Ingrahams sell their Baltimore home and buy a spacious and easily affordable family home (with THREE bathrooms) in Red Lake Falls — population 1,400, not including the deer, rabbits and occasional bear.

The book is a quick and fun read. You’ll finish it in a couple days on the train, if you’re one of those daily long-distance commuters.

But the family members are warmly welcomed by the residents. They immerse themselves in traditional local activities: hunting, ice fishing, riding sleds pulled by dogs, and frozen turkey bowling (which is just what it sounds like).

They try the traditional regional foods, including hot dish, lutefisk, lefse and walleye. They adopt new pets. They realize they can afford to have another baby.

They meet with challenges, of course. Finding adequate emergency health care in a rural area, for example, and wondering whether the local school will be able to provide the right services when one of their boys is diagnosed as being on the autism spectrum. And learning how to live through winters where temperatures routinely drop as low as minus 40 degrees.

Reading about the family’s adventures prompts one to think: Why do I live where I live? How would my life be different if I packed up and moved to a coast? (Or vice versa for coastal dwellers.)

Ingraham, ever the data reporter, sprinkles his memoir with hard facts: Data from the Pew Research Center, for instance, shows that more than half of Americans, 54 percent, say they’d prefer to live in a small town or rural area. But more than 80 percent of Americans live in cities.

What the Ingrahams find after their move is a home, friends and a strong sense of community. In this era where many think of America as two countries — blue and red, the coasts and “flyover country” — Ingraham’s book reminds us that we are more similar in our hopes and desires than we realize.