When Alison and Kyle meet in high school, something clicks. But their on-again, off-again relationship, even though it lasts for several years, is usually more off than on, and the dreams they pursue eventually lead to their parting. Kyle wants to be a doctor, serving the underprivileged, trying to save the world. Alison doesn’t want to save the world, but she is determined to make her mark as an actress. 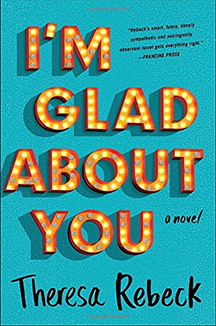 This set-up may sound like the plot for a romance novel, but author Theresa Rebeck has more complex matters in store for the reader. Romance is a factor, but I’m Glad About You uses this story of mismatched soulmates as a springboard to explore such themes as the difference between dreams and reality, love and lust, compromise and sacrifice, fame and infamy, identity and façade.

It was Rebeck’s name on the book that drew my interest. The woman seems tireless. She’s been a writer on such TV shows as NYPD Blue and Law and Order: Criminal Intent, and for movies such as Harriet the Spy and Catwoman. Her numerous plays include Spike Heels, Bad Dates and The Scene, and she also was the creator and executive producer of the NBC musical drama Smash. And those are just the highlights or her resume.

Although Rebeck’s often R-rated, heartbreaking character study of two people desperately seeking solace won’t be for everyone, I found her keen look at life choices both rare and gratifying. And despite its weighty themes, I’m Glad About You is an easy read, often funny, sometimes frustrating, frequently surprising. Just like life.

When the novel focuses on Alison’s path as an actress and Rebeck dismantles the machinery of show business, one of the novel’s themes truly comes alive. For as Alison discovers, making it as an actor, director, screenwriter or even an entertainment reporter, which offers entrée to a supposed world of glamour, riches and untold happiness, may just mean losing your soul. From the blatant sexism to the cynical demands of celebrity, the flexible values and frequent unfathomable decisions — “People weren’t people out here, they were moves on a chessboard in a town where nobody knew how to play chess”— being a star does not necessarily make for a lustrous, sparkling life.

As Alison struggles through both the New York and Hollywood swamps toward stardom, Kyle plods through his work as a pediatrician in Cincinnati, where he can barely save himself, let alone the world. His spiritual longing to follow God’s will bumps against a wife who appears to despise him and two small children who seem to have little need for him. And while Alison and Kyle lead vastly different lives in vastly different places, their paths do cross on occasion, and neither can forget the passion that drew them together — and that ultimately forced them apart.

I’m Glad About You won’t be all things to all people, just as Alison and Kyle discover that the lives they desperately want to live might not be the lives they will live. And that’s a fine thing to contemplate in a book that has some secrets waiting for you to discover.