I have climbed the Everest of the book world.

I want to use phrases like “howling fantods” in conversation.

I want to understand what the hell I just read.

But most of all, I want Infinite Jest to never end. 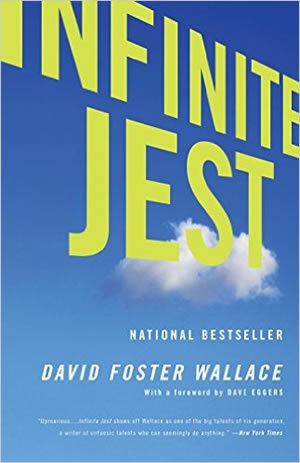 I’m not the only one — the Internet, the swirling digital mess that it is, is full of other readers who have a desire to continue the stories of all those sad, desperate and all-too-real characters that David Foster Wallace created in his 1996 novel.

Also like many other readers, this wasn’t my first attempt at the 1,080-page tome. I’ve tried at least twice before to tuck into this behemoth, but both times I petered out around page 150 — barely making a dent. I remember seeing friends take it on and thinking, “How in the world do they have time for that book?”

The trick is to take it like a night drive: You can’t see the whole road ahead of you, but your headlights will illuminate just enough to travel by. I read along with the online crowd at Infinite Summer, who took on the Herculean task of a group-read in the summer of 2009. Six years later, armed with an arsenal of multicolored pens, a notebook, Post-it notes and some patience, I began to read on June 21. I took it at an average of 10 pages a day, defining words and phrases I didn’t know in my notebook and jotting down my thoughts afterward. I hauled that damn book everywhere — to work, to play, anywhere I might have a free minute. It was a physical reminder of the challenge I took on.

I had so many questions while reading, but none of which Wallace could answer. It’s not for lack of trying; I’m a journalist and have no qualms in hunting someone down to chat. He’d be harder to contact than most, though, as he killed himself in 2008. Instead, I took to talking to my cat, George Catstanza, who was no help, though he did enjoy nibbling the edges of my paperback copy. Wallace, a known animal lover, would’ve probably found that fitting. I shouted on multiple occasions. I also cried. And laughed out loud, great big belly laughs that echoed through my home. It’s a very lonely book, and a very lonely venture. It stirred some internal reflection in me that I know will last for years.

It’s so rich in story, it’s painful. The only thing I can do is throw up my hands and make some inhuman noise when I think about what an accomplishment this book is. It’s ripe with quotable gems that fit just as well on the page as they’d fit on a poster:

“You will become way less concerned with what other people think of you when you realize how seldom they do.”

“Te Occidere Possunt Sed Te Edere Non Possunt Nefas Est" (“They can kill you, but the legalities of eating you are quite a bit dicier”).

Now that I’ve finished it, though, I find it hard to discuss. What’s it all about? It’s about a family, yes. Members of the Incandenza family are the plot-drivers, but you also have the spectral and veiled Joelle Van Dyne, the horrible Don Gately (who nonetheless has you rooting for him), and the cast of characters from Boston’s Enfield Tennis Academy and the greater Organization of North American Nations. It’s about the effect Entertainment (with an intentional capital E) has on the human race. It’s about that saving grace present in humanity — and also about the cruelty we can inflict on each other and ourselves. It’s about everything and nothing at all. Perhaps that’s the point.

Amanda Gray is a reporter for The South Bend Tribune.