Susan Gubar’s new memoir fairly winked at me from its perch in the new-book display at a favorite library, low-hanging fruit for a book-hungry eye: late-life love. She had me at that hyphenated adjective and the understatement of the cover design’s lowercase title.

My wife and I — in our 70s, five years apart — are celebrating 20 years of marriage, second marriages for both of us, one divorced, the other widowed. “Late-life” promised me neither the headlong tumult of Romeo and Juliet, nor the countless complications of love in the many-decades sprawl of midlife, but instead “late love,” when time’s winged chariot is no longer at my back but has scooped me, sometimes feeling alone, into its front seat and hurtles forward, its “Horses’ Heads,” as Emily Dickinson wrote, “toward Eternity.” 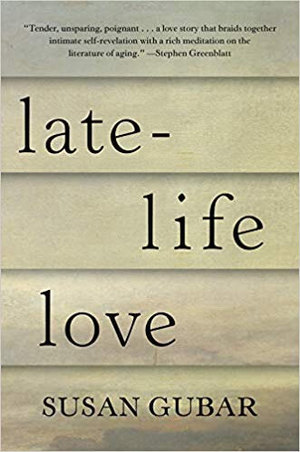 I might be ready for Gubar’s book, I thought with only a slight hesitation.

The dustjacket comments offered complex praise from Joyce Carol Oates, Henry Louis Gates Jr. and Renaissance scholar Stephen Greenblatt. Gates calls Gubar’s subject a “most under-examined topic.” True, I thought, though I wasn’t sure I wanted a full-on academic examination from Gubar, a renowned feminist scholar and distinguished professor emerita of English and women’s studies at Indiana University. That place in me that remembered a graduate-school professor explaining, “your days of reading for pleasure are over,” resisted. I wanted reading pleasure.

I needn’t have worried. The novelist Eudora Welty wrote that the purpose of fiction is to educate feelings, an especially resonant pleasure. Gubar’s memoir demonstrates with profound sensitivity just how such education occurs. It tells the story of her love with her former IU colleague, now husband, Donald Gray — each with grown children from earlier marriages, each supporting the other through serious health challenges.

Gubar has already written about her harrowing struggles with ovarian cancer in Memoir of a Debulked Woman. And Gray, at 87 nearly two decades older than Gubar, faced an incapacitating leg injury: a man who once ran marathons suddenly marooned in the back seat of the car for six months as his wife drives him everywhere. But it’s not all grim. Gubar heaves Gray’s wheelchair, raised toilet seat and other medical paraphernalia down the basement stairs once her husband no longer needs them. “We eyed the remaining walker and cane with a genuine sense of relief and comfort,” she writes.

Such gleeful abandon is not limited to late-life love, though recovery at such an advanced age surely amps up the celebration. Gray had a lot more skin in the game than your typical 20-something recovering from a torn ACL, or even your average mid-50s guy getting over an elective knee replacement.

What launched Gubar into this project was the sapphire ring Gray gave her for her 70th birthday, a milestone that her diagnosis had suggested she would never reach. Not wanting to make a public splash of it, he left it in the bathroom for her to find the morning after her big party, next to a vial of the trial pills that helped save her life. “Never before had I received such a lovely present,” she notes. Her husband had bought it without even knowing it would fit (how else to surprise?), or “how much time I (might) have to wear it.”

Considering the “sense of an ending that saturates the powerful affections of love in later life,” this preeminent anthologist and literary scholar began to riffle through the “Rolodex” in her brain for works of literary and cinematic art that explore the kind of love she and Gray know, given that, “from classical times onward, Eros was thought to be the youngest of the gods.”

All she can summon at first is “antique lovers,” “dirty old men and lewd widows,” Chaucer’s Wife of Bath, Dickens’ decrepit Miss Havisham, King Lear — few examples of the love she and Don share. “Literature has neglected the old and their emotions,” she quotes storyteller Isaac Bashevis Singer. What more incentive might a writer of her considerable skills require?

Gubar’s lifetime of reading allows her to explore dozens of stories, poems, plays and films, and she breathes fresh life into works she thought she already knew while discovering new ones. She looks to the unlikely pairing of novelists Philip Roth and Colette to inform us of “the special urgency and poignancy” when “Eros has one foot out the door”; to the simple directness of writer Kent Haruf’s character, Addie Moore, in Our Souls at Night, who knocked on her widowed neighbor’s door one evening to ask “if you would consider coming to my house sometimes to sleep with me”; or to Louis Begley’s characters in the Schmidt trilogy, who address the “long backstory . . . late-life lovers must convey in order to connect with each other while keeping adult children at bay.”

Gubar wears her considerable learning lightly, anchoring her literary reflections in her marriage and daily life. Domestic errands take her to FedEx and TJ Maxx. Another late-life issue, the pain of downsizing into smaller digs in their Bloomington, Indiana, community, provides a secondary narrative thread throughout the memoir.

It’s a masterful blend. The literary critic in Gubar escapes a gathering of retired faculty so she can get back to reading Marilynne Robinson’s Gilead. She’s trying to figure out its main character’s late-life love of “his unlovable godson,” as she considers such love in deeply religious people, in this case through the lens of the parable of the prodigal son. Another Robinson novel, Lila, requires “half a box of tissues” (not much literary criticism there), as she reads intermittently while engaged in marathon cooking.

Susan Gubar has struck a rich vein that will nourish readers of any age. Late-Life Love, because of her method, feels inexhaustible. It tempts readers after closing her book to discover the scores of works she cites — a garden of infinite forking paths, the old-school internet. One image comes from Ovid, whose Baucis and Philemon metamorphose into the “inseparably mingled limbs” of an oak and a linden. In typical fashion, Gubar updates this trope with a reference to film critic Molly Haskell, who characterized her long marriage to Andrew Sarris as “grown together like two trees.”

Should I finally get around to reading Ovid?