The nature of my liberal arts degree meant lots of reading during each semester and lots to re-read in preparation for exams and papers during final exams. You can imagine my horror when, at a morning meeting during my last-ever finals week at Notre Dame, one of my professors handed me a book to read, promising that I would really enjoy it. 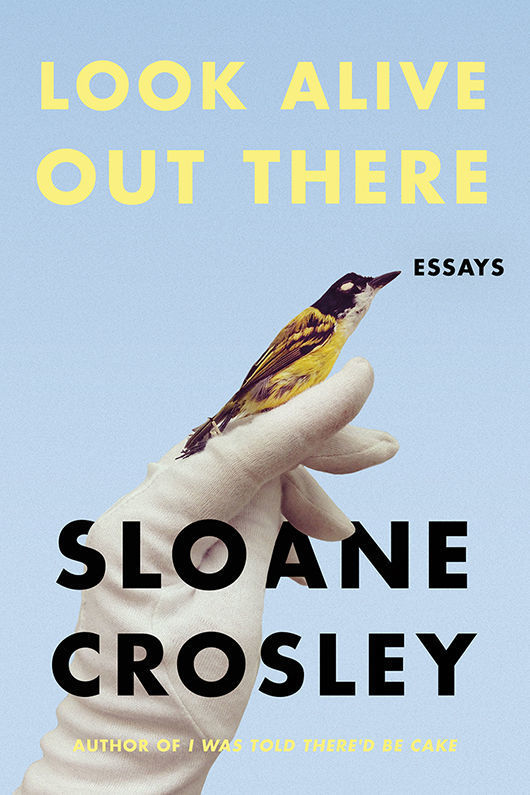 Because I have good parents, I know you should never judge a book by its cover. But the cover of Look Alive pulled me in with its simplicity. Printed in yellow capital letters, the title phrase — an axiom my dad yelled at me way too much from the sidelines of my childhood — immediately intrigued me.

At any other time of year, I would likely have consigned this book to a box for a few months before it would emerge on my bedside table, then it probably would have gone back into cardboard oblivion for eternity. But my unwillingness to do reading-that’s-not-for-school was no match for my finals-week procrastination. Sprawled out on one of the couches on the sunny Morris Inn patio, I dove into Crosley’s essays.

Before I knew it, I was sunburned — and completely lost in her writing.

Crosley, the bestselling author of I Was Told There’d Be Cake and How Did You Get This Number, has written for a breadth of publications from The New York Times to Vogue. She edited The Best American Travel Writing when she was 33 and is a contributing editor at Vanity Fair.

From her experiences with travel writing to living and working in New York City to her appearance on the CW’s Gossip Girl, Crosley's glamorous life isn’t exactly relatable to my just-out-of-college marketing job, but that’s exactly what made her book so appealing. Crosley’s the kind of person you want as a fairy godmother, someone to tell you how to really make it in the world. She weaves tiny nuggets of wisdom into each essay, whether it’s advice on which mountain-scaling adventures to avoid when adventuring abroad or how to get your stolen website back from a ruthless hacker.

For instance, though my mother has told me over 1,000,000 times that I should bring a cardigan to anything that involves me leaving the house, I only heed this advice when Crosley offers, “I think by now we can all agree that the foundation of world travel goes something like, ‘Bring a cardigan.’”

Crosley just seems like someone I’d be friends with. Unless we bump into each other on the street, though, I’ll have to make do with these essays.

That’s not such a bad outcome. Crosley writes like she’s talking to you, simply telling you over drinks how her day went. She also happens to be laugh-out-loud funny. In a shorter essay, she describes attending the week-long period of mourning in the Jewish tradition, shiva, in her apartment building — an otherwise grim event that only she could make you laugh about.

From the seemingly routine aspects of life, like unjustly having to give up a cab en route to the airport, to more serious issues, like dealing with illness, Crosley’s observational humor is brilliant. Each essay reads like a private stand-up show.

In “Outside Voices,” a personal favorite, Crosley describes an obnoxious neighbor, a teenage boy named Jared, and her trials and tribulations to get him to just shut up. It’s the perfect tableau for so many things in our lives, when something so small makes us so irrationally angry.

Jared, just another privileged boy living in New York City, probably isn’t trying to annoy Crosley, but he manages to drive her insane. And while I understood he is just another teenage boy blasting music in his parent’s backyard — I mean, who among us was not an annoying teenager — I found myself cheering for Crosley, mentally begging Jared to just, please, shut up.

I flew through Crosley’s essays, but as I neared the end, I began savoring each one more, hoping that by some miracle more pages would appear. Of course, they didn’t. But I held on before reading the last essay as long as I could, exerting more self-control than I have in a while.

Unlike many of my belongings, the book itself survived Senior Week, my frantic move out of Ryan Hall, the unpacking of boxes at my childhood home, the repacking of those boxes, and the move to my first apartment in Detroit. It is technically the last book I read in college, and I can say with certainty that it is a favorite.

Rachel O’Grady just moved to Detroit to take on a marketing position with General Motors, which is ironic given that she got her driver’s license one month after her Notre Dame graduation.