Today, the art of letter writing has been largely lost — a fact that has been much lamented in a spate of books published in the past decade (just google Amazon for “lost art of letter writing”). One can, of course, fairly ask: Who needs to write letters anymore, with the advent of email, text messaging and Facebook? Well, two young women writers — Amy Andrews and Jessica Mesman Griffith — discovered the need or, rather, the spiritual need to do so. The result is Love & Salt: A Spiritual Friendship Shared in Letters. Amy teaches mathematics at Northwestern; Jessica is a freelance writer and co-founder of the blog Sick Pilgrim. 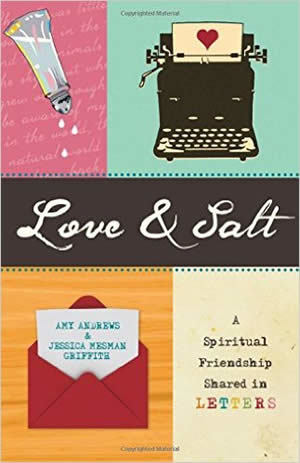 The authors met at a writing workshop where they discovered they were the only ones seriously interested in religious matters — they thought and wrote a lot about God, of all things. The other writers at the workshop just didn’t seem to “get” religion or were oblivious to it. As a result, Amy and Jessica were hesitant to Speak Its Name, except to each other. The two soon struck up a close friendship and Amy, a former agnostic with a “naturally religious” disposition, decided to convert to Catholicism. “What’s odd about my story,” she writes, “is that . . . my father was a committed atheist and my mother an agnostic. I always tell people I am a second-generation not, a not-anything. I wasn’t even baptized just in case.”

Amy’s innate religious sensibility unfolded gradually in her life. “The way to conversion has been more like a long crescendo, a long accumulation of experience, tries at this and that, false starts . . . If I could collapse all my experience into an instant, that gradual unfurling of belief . . . would likely be as loud as a thunderclap, bright as a burning bush. But as it is, I squint my eyes and strain my ears to try to discern God.” She is not without her doubts, though. She fears that her conversion to Catholicism will be yet another phase, like exercise plans or diets — the stuff of short-lived New Year resolutions. Yet she persists.

Jessica, a revert to the Church, agreed to be Amy’s sponsor. They lived in separate cities — Amy in Chicago, Jessica in South Bend, Indiana — so to maintain close contact during the 40 days of Lent leading up to Amy’s baptism, they vowed to write letters to one another every day — personal, spiritual letters that reveal their struggles with faith, life, pregnancy, child rearing, and with how to be a mother and a writer at the same time. Their guides are saints of the Church and great writers of the past: John of the Cross, Augustine, Wendell Berry, J.M. Coetzee, Joseph Campbell, Flannery O’Connor and Julian of Norwich, to name a few. And, of course, the mystery and symbolism of the liturgy undergirds their faith, giving them strength and solace during difficult times.

At times they reverse roles: Jess doubts the strength of her own faith to serve as a sponsor. She becomes the doubting Thomas at times. Following a family setback, she writes, “Sometimes I want the luxury of giving up, of unbelief. How can one be a Christian and remain properly depressed? There is always the threat of resurrection.” Amy then becomes the one with encouraging words, inspired by Teresa of Avila, G.K. Chesterton, or the life of Thérèse of Lisieux.

They exchanged letters well beyond the 40 days of Lent; in fact, for another two years, and their volume comprises more than 300 pages. The reader might feel at times that the letters grow a bit tedious, with the authors recounting some of the same doubts, daily hassles, hopes and dreams. That’s okay. You can skip some pages to a few weeks later, and start reading again. But don’t skip the “Loss” and “Notes for Letters Never Sent” sections, which deal with a period when tragedy struck. And know that if you do skip, you might miss out on some beautifully crafted prose. This gem of a book has had some success on the market, but it deserves a much wider readership.

Kenneth Garcia is the associate director of the Institute for Scholarship in the Liberal Arts at Notre Dame and the author of Academic Freedom and the Telos of the Catholic University (Palgrave Macmillan, 2012). This is another of his What I’m Reading blogs focusing on “Overlooked Gems,” which began with Nancy Nordenson’s Finding Livelihood.