There was a time in America’s history when the continent was a vast sea of possibility. It was the raw material for visionaries and schemers, the enterprising and broad-shouldered. That’s the great story of 19th century America, and the theme that animated our nation’s 20th century mythology — the unleashing of human nature to go further, dream bigger, build higher.

This is the world into which Martin Dressler was born, the son of a New York City cigar shop owner. This is his Horatio Alger story, Martin Dressler: The Tale of an American Dreamer, which won the Pulitzer for fiction in 1997. 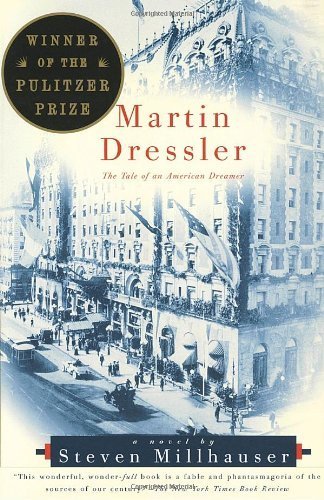 Young Martin was a diligent worker — and a son who saw beyond his father’s tidy but humble shop. He expanded the business into the lobby of a nearby hotel and soon landed a second job there as a bellboy, only to rise through the ranks to become the hotel manager’s personal secretary. He learned the ways of business, the art of meeting people’s needs and how the burgeoning city provided a vast, fertile world in which to grow dreams.

The restless young entrepreneur opened a series of successful diners and became one of the city’s most successful hoteliers. His climactic achievement is the Grand Cosmo, “a world within a world,” a blend of sophisticated practicality and test-the-imagination fantasy.

Steven Millhauser’s novel convincingly details the business operations of Martin Dressler’s serial creations and the transformation of Manhattan’s turn-of-the-century urban geography. The treatment of these elements gives heft to the book, artfully and concisely crafted.

But two other threads held more appeal for me. One was the human — the relationships Martin Dressler had with parents left behind, the hotel guests, the chambermaid, the engineer and business partner, and most especially the Vernon women, Emmeline, Caroline and their mother. One he married, one he partnered in business, none rivaled his ambitions.

The other was more thematic, more literary — the examination of the American dream, Dressler’s restive hunger, his addiction to the next big thing. Though Martin was a sympathetic character (rather than stereotypically greedy, corrupt or villainous), he also had the streak of a lost soul in him. And as the book mounted toward its climax, it also revealed itself to be what its title signaled — a tale, a fable, a textually rich allegory.

By its final pages the still young man considers that he may have “dreamed the wrong dream” and walks toward a satisfying ending that says much about happiness and the myth that still drives American dreamers in the 21st century.