Author Jon Krakauer describes Missoula, Montana, as “congenial and picturesque.” It’s the home of the University of Montana and its football team, the Grizzlies, a highly successful member of the Big Sky Conference in the Football Championship Subdivision. In the past decade the city experienced a rash of sexual assaults and many of the accused were Grizzlies. Krakauer’s book, Missoula: Rape and the Justice System in a College Town, intensely covers a few of the cases between 2010 and 2012. 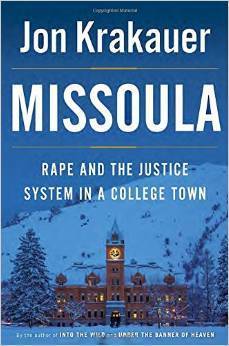 If you haven’t been to Missoula (who has?), it’s the area in which Norman Maclean set his book, A River Runs Through It, which became a popular film directed by Robert Redford in 1992.

During the 52 months between January 2008 and May 2012, the U.S. Department of Justice found there were 350 sexual assaults of women reported to the Missoula Police Department, a rate that based on average for cities of that size is actually below average (the average would have been 390 sexual assaults). Yet, with its relatively small size of 69,000 people, and the dominance of the university, which, like Notre Dame, is the town’s largest employer, Missoula provided Krakauer with an ideal opportunity to examine all aspects of this increasingly alarming issue.

The book, a best-seller, has two redeeming qualities. First, it examines in convincing detail all the aspects of the issue: the crimes, the difficulties of proving the crimes, the reality and myths of false allegations, and the lingering effects on the victims. Second, despite the seriousness of the material, it is never dull or plodding.

Krakauer details cases in which assailants were found guilty and, at some length, one case in which the alleged assailant was acquitted — a graphic examination of how the he said-she said elements of an allegation are truly vexing and confusing. And, of course, both alcohol and the nature of what constitutes consent are prominent in most of the stories.

The storylines are enhanced by Krakauer’s diligent reporting. So we get to know good cops and bad cops, good college administrators and bad college administrators, and, well, lawyers of varying stripes. There also is a heroic journalist, Gwen Florio, then of the local daily, The Missoulian, who despite threats and strong opposition from the locals, reports vigorously on the problems in Missoula.

Throughout the book there is an undercurrent of the passion for the Grizzlies football team, a passion familiar to anyone in a college town with a well-known team. This is what makes the good cops and other good professionals all the more notable.

Krakauer didn’t examine each case or interview each victim or accused from this period, but he couldn’t have possibly done so. He examines several cases in sufficient depth, both from the standpoint of how the university handled them and how law enforcement responded. If you want a better understanding of the challenges that sexual assaults pose for not only its victims but also those charged with seeing justice done, this book will leave you better educated.

Matt Storin is a retired journalist and a former director of communications at Notre Dame.