Scrolling through Twitter one day not long ago, I came across this:

NOVEMBER ROAD, by Lou Berney: When people say they want to read a really good novel, the kind you just can't put down, this is the kind of book they mean. Exceptional.

That’s really all you need to know, so if you want to make like me and just go read the thing, be my guest. If, for some reason, you’d like to hear more about November Road from me rather than just take Stephen Freaking King’s word for it, who am I stop you? 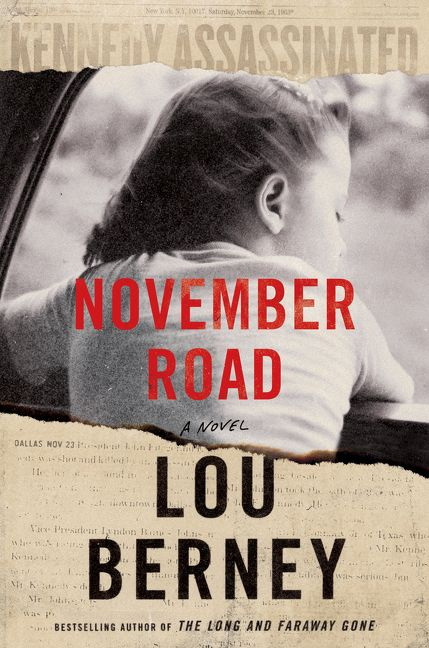 Here’s the setup: In the fall of 1963, life as a high-level lieutenant for New Orleans mob boss Carlos Marcello is treating Frank Guidry well. He glides into rooms, all charm and charisma. A fixer who fulfills his obligations without asking questions or raising them, Frank has gathered the spoils of his illicit profession like a poker hustler raking in chips with both arms.

He gets jobs that require competence and discretion, like dropping off a getaway car in Dallas. Frank knows not to wonder why, just to do what he’s told. Then John F. Kennedy gets killed in Dallas and Frank realizes he’s become unwittingly entangled in something much bigger than gangland thuggery. As one of the few people with information that could implicate Marcello in the assassination, he’s now a threat to be eliminated before the feds start connecting dots.

For the purposes of Lou Berney’s fictional thriller, Marcello — the nonfictional “Godfather” of organized crime in New Orleans — just is the mastermind of the century’s most infamous murder and deepest conspiratorial rabbit hole. That’s all there is to it. (Former Notre Dame law professor G. Robert Blakey ’57, ’60JD, chief counsel to the 1970s-era House Select Committee on Assassinations and co-author of Fatal Hour: The Assassination of President Kennedy by Organized Crime has marshaled evidence toward the same conclusion of mob involvement in real life.)

So don’t pick up November Road expecting another entry in the Kennedy conspiracy oeuvre. Berney’s not making a case. He’s telling a story. The novel takes place amid the mourning and mayhem in the aftermath of the assassination, but far away from the convulsive events, and even from the sound of Walter Cronkite’s voice. Kennedy’s murder looms in the background, adding paranoia to every encounter in Guidry’s flight for his life.

Adding poignancy is the parallel flight of Charlotte Roy, two young daughters in tow, from her drunken, ne’er-do-well husband. Charlotte’s ambitions, stifled in her small Oklahoma town, become downright suffocated under the weight that her husband’s demons heave onto her shoulders.

Their paths — Frank’s and Charlotte’s — intersect, you won’t be surprised to learn. I sense that a lot of this synopsis makes November Road sound pretty formulaic, which is a disservice to a story that develops in unfolding depths.

Berney renders his characters — including Barone, the hitman on Frank’s tail, and various underworld-adjacent hangers-on and victims — in perceptive shades that add complexity to the broad brush of type. The plot is likewise layered with multiple storylines and genuine ambiguity of next-moves and motives and emotions.

Frank’s insinuation of himself into Charlotte’s life, at first to disguise himself under the cover of a happy vacationing family, leads him into a yearning for exactly that. Charlotte, for her part, despite the nagging sense that Frank might not be the insurance salesman named Wainwright he purports himself to be, falls for the promise of a full and fulfilling life he seems to offer.

Once traveling together, bound in their hearts for the same shared destination, Frank and Charlotte don’t end up where you — or they — would expect. Just a few days earlier, neither of them would have believed where life would lead them.

It’s a testament to Berney’s intricate and insightful storytelling that, by the time they get there, he’s made believers of his readers.