My first mission at any used-record shop is to search the A’s for Hoyt Axton.

Axton wrote “The Pusher” for Steppenwolf and “Joy to the World” for Three Dog Night. Another song, “Lion in the Winter,” I believe he wrote just for me. 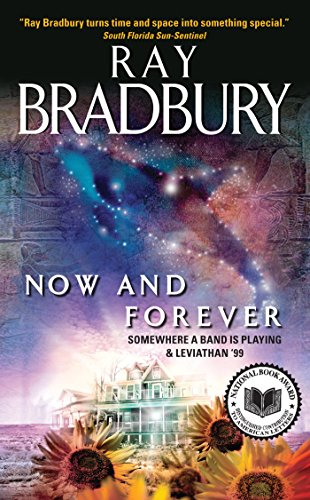 He recorded it as a duet with Linda Ronstadt in 1975. No song before or since has reached me the way that one has. I now own nine Axton LPs with maybe 100 songs total. None is as good as “Lion in the Winter,” but I won’t stop looking.

I feel the same way about two books — Sherwood Anderson’s Winesburg, Ohio and Ray Bradbury’s Dandelion Wine. The words therein are so personal to me that I feel like I wrote them myself. I rarely discuss them with anyone. It invades my privacy when I do.

At a bookstore earlier this summer, I was looking through the A’s for Anderson and then the B’s when I found Bradbury’s Now and Forever, a short book released in 2007 containing two novellas. I literally sank to the floor as I opened it to page 9, where the first chapter of the first story began.

And here were his words: “Soon a dark train charged out of the east with fire and steam and thundered through the station. On its way it slowed at a platform littered with confetti, the tatters of ancient tickets punched by transient conductors.”

I had a new discovery.

This is a book with just 225 pages in large print. I was in real danger of devouring it all, like French fries from a fast-food sack in the car on the way home.

I shouldn’t assume people know about Bradbury. He was among the most popular of the mainstream science-fiction writers of my youth. His best-known works include Fahrenheit 451, The Martian Chronicles and Something Wicked This Way Comes.

He made his reputation in the 1950s, a fertile period for science fiction. Bradbury, Kurt Vonnegut, Isaac Asimov, Arthur Clarke and Robert Heinlein all were churning out literate, thoughtful books exploring the what-ifs of our existence in a post-world-war universe.

Frankly, I’m not drawn to sci-fi, which usually offers a bleak outlook where the future is dystopian. That’s why I was grateful for Dandelion Wine, which I first read a quarter-century after it was published in 1957.

In it, Bradbury celebrates the simple pleasures of his youth in Waukegan, Illinois, describing evenings where families sit together on their front porches until the last light of the day is gone. The novel, among other things, is about time travel. His time machine is not some ultra-sleek gizmo. Instead, it is the dandelion, which captures the glory of today’s sunlight, holds onto it for days or years in a jar, and then releases that joy in the form of wine.

His books are time machines as well. Bradbury, dead since 2012, captures, holds and releases for future audiences.

“Somewhere a Band Is Playing,” the first story in Now and Forever, is about a writer who arrives in a mysterious Arizona town that will be demolished when a new freeway is built. He discovers it’s is a special town, where no one ages or dies. It is basically a repository of all the best arts and ideas conceived by humankind. He falls in love with the ancient Egyptian queen Nefertiti and must choose between this quaint town that is all about preservation, and the outer world, which is all about progress.

The second story, “Leviathan ’99,” is a rewrite of the 1851 Melville novel, Moby-Dick. In this update, an astronaut named Ishmael accompanies a deranged captain who is pursuing a comet that blinded him years earlier.

Unfortunately, after the chapter I read in that bookstore, reality kicked in. Neither plot line is worthy of Bradbury’s skill. The lead characters are without nuance and seem to march joylessly from introduction to climax. As a reader, I am unchanged, relieved at the completion.

If a sports metaphor will do, this was like watching Willie Mays hit a soft grounder to shortstop in a game that wasn’t in the World Series. But still, it was Willie Mays.

I’ve read three other Bradbury books. I know he is a Hall of Famer and can’t be judged by one at-bat. That’s why I’ll still go to bookstores, just like I listen with hope to obscure Hoyt Axton songs.

I know whatever it is, it’s there, somewhere in the A’s and B’s.