When I was at Notre Dame, apartheid was in full swing, which makes me feel both incredibly old . . . and hopeful. Old because, let’s face it, the 1980s was a long time ago. And hopeful, because that kind of discrimination was overcome. By humans. In my lifetime.

Unfortunately, social injustice hasn’t magically disappeared today. The books about it for children, however, have come a long way since my childhood.

Parched, by Vermont College classmate and fellow writer Melanie Crowder, is one such example. You might argue that I’d be biased in my discussion of this work since we went to school together, but this story, from its inklings to final version, won prestigious fine arts awards and landed Crowder her agent and first book contract. It doesn’t need my bias. It stands . . . shines . . . all on its own. 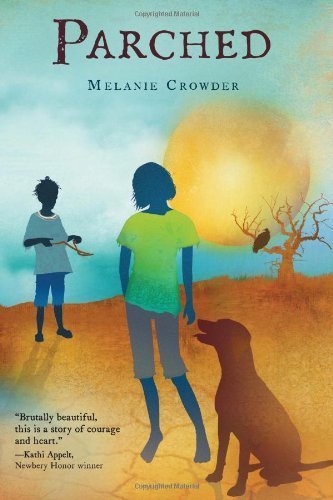 I also wasn’t the only one who read the book. I passed it along to my daughters, ages 13 and 10, to get an idea of how the target audience would react to a book that covers some tough issues.

Parched chronicles the stories of Sarel, accompanied by her pack of hunting dogs, who is struggling to exist on the parched African savanna after her parents are murdered and their farm burned. And Musa, a boy with a rare gift for finding water, who is running from the desperate gangs who want to enslave him in a drying, dying city. The two team up to survive and create a new life in their harsh surroundings.

Crowder uses alternating points of view to deepen the emotional impact of her story. When the narrative follows either of the child protagonists, it is told from omniscient/close third. This is interspersed with first-person narrative from the perspective of the main hunting dog, Nandi.

My daughters, who love animals deeply and unconditionally, and feel loved back from them in the same way, were pulled in most by the dog chapters. Nandi’s pain or worry heightened human pain and worry exponentially. She made my girls care, made them mourn and, most importantly, made them keep reading in a way no human protagonist could.

As an adult writing for children, I pocketed the trick for a future project. Good authors borrow. Great authors steal.

I experienced Parched similarly to the way my children did. Because of the dogs, I cared more. Felt more. Maybe that’s because we never outgrow those deep emotional ties to our pets. Don’t get me wrong. Given the burning house scenario, I’m going to rescue my children and husband first.

Authors know this and steal it for their own purposes.

Stacy Nyikos is the author of several children’s books, including Dragon Wishes, Toby and her upcoming release, Waggers . . . which is about a dog.