Quitters sometimes win. Often, even. Walking away from an activity, in fact, might be an essential step on any path to success.

Intuition and Malcolm Gladwell tell us that, while the journey to achievement might be long, it should be straight and narrow. Decide young on the guitar or neuroscience or soccer and stride on — around obstacles, through doubts, past tedium — compiling miles on a pedometer of dedication that will, in time, reward you with mastery. The “10,000 hours” idea that Gladwell popularized in his 2008 book, Outliers. Practice makes perfect. Focus. Grit. Whatever you do, according to motivational poster spokesperson Winston Churchill, “never give in, never, never, never.” 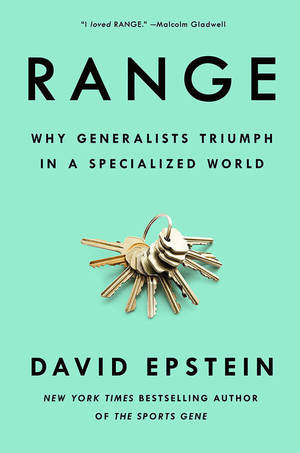 Author David Epstein complicates this thinking by also quoting the part of Churchill’s 1941 speech where England’s wartime prime minister said, “except to convictions of honor and good sense."

Epstein’s new book, Range: Why Generalists Triumph in a Specialized World, highlights the good sense of giving in once in a while. Try a bunch of stuff. Continue what suits you, cast off what doesn’t. Reverse course at the dead ends in life’s maze without regret, accepting those detours as a necessary cost of progress. It will, statistically speaking, increase your chances of winning a Nobel Prize.

“Scientists inducted into the highest national academies are much more likely to have avocations outside of their vocation,” Epstein writes. “And those who have won the Nobel Prize are more likely still.”

To be clear, auditioning for your local amateur theater company will not transform you into, say, a chemist of international renown. The idea, for which Epstein marshals much anecdotal evidence and data, is that people who achieve greatness in one domain often allow themselves promiscuous exploration beyond their area of expertise. That’s not just because those people happen to be possessed of such genius that they can moonlight and maintain their professional superiority. There’s reason to believe their wide-ranging extracurricular excursions might be essential to their signature achievements.

Epstein reflects on the work of psychologist Robin Hogarth, an expert on judgment and decision-making, who divides human endeavors into “kind” and “wicked” learning environments. In a “kind” pursuit, says Hogarth, “a learner improves simply by engaging in the activity and trying to do better.” Golf and chess are like that. But most occupations are “wicked,” requiring agile judgment to adapt to complex or novel circumstances and the unpredictability of other people. Such judgment is best nurtured in the pursuit of multifaceted interests.

Narrow experience, on the other hand, threatens to calcify thinking. Veteran cardiologists, Epstein notes, often treat chest pain with stents, “even in cases where voluminous research has proven that they are inappropriate or dangerous.” Patients had better outcomes, researchers found, when they were admitted during a national conference of cardiologists — meaning, the experienced doctors were away and “common treatments of dubious effect were less likely to be performed.”

Nintendo offers another example of the value of a diverse mind. Started in 1889 with a tiny shop in Kyoto, Japan, Nintendo made hanafuda playing cards. By the 1960s, the cards’ popularity had waned, and the company staggered through a variety of clumsy pivots. The president sought innovative young talent, but the employees he coveted flocked to cutting-edge Tokyo companies. In 1965, Gunpei Yokoi, a recent college graduate with an unimpressive academic record and no other job offers, was hired to work on Nintendo’s few remaining machines that made the hanafuda.

The aptitude Yokoi lacked as an electronics student, Epstein writes, he made up for as “an enthusiastic hobbyist: piano, ballroom dancing, choir, skin diving, model trains, working on cars, and most of all monozukuri — literally, ‘thing making.’” One day at work, Yokoi crafted an extendable wooden arm, like the kind that pops out of a jack-in-the-box, and put a gripping tool on the end. His motive? To reach faraway objects without standing up.

The president noticed the apparatus and, rather than scolding a slothful employee, asked if Yokoi could make a game out of it. Adding colored balls for the “Ultra Hand” to grab, Nintendo sold 1.2 million of the toys and Yokoi became the company’s first head of research and development.

Yokoi intentionally kept Nintendo low-tech. One day he noticed a train commuter passing time while playing with his calculator. That spawned the notion that a simple, hand-held diversion need not have the bells and whistles that competitors were spending time and money to create.

Nintendo’s grayscale Game Boy, old-school even when it was new in 1989, outsold the color and graphics of the competition’s comparable consoles. The simple operating system allowed developers to create numerous games that added variety to the toy’s affordability and portability. Game Boy became the ultimate triumph of Yokoi’s philosophy of “lateral thinking with withered technology.”

Yokoi’s academic performance had little to do with his success, but higher education has advantages in cultivating the kind of fertile mind Epstein celebrates. Although college is often reduced to glorified career preparation, Nobel Prize-winning economist Theodore Schultz speculated that it should be valued for the time it offers students “to delay specialization while sampling and finding out who they are and where they fit.”

A study by Northwestern University economist Ofer Malamud supports that theory. Malamud researched an era when students in England and Wales were required to specialize on a career track before college. In Scotland, meanwhile, students had to spend their first two years in college studying different subjects.

“College graduates in England and Wales were consistently more likely to leap entirely out of their career fields than their later-specializing Scottish peers,” Epstein writes. “And despite starting out behind in incomes because they had fewer specific skills, the Scots quickly caught up.” He concludes: “Learning stuff was less important than learning about oneself.”

Economists call the fit between people and their occupations “match quality.” In the rush to specialize early, young people often lack the self-knowledge necessary to understand what suits them. The key for Epstein is that this personal process of discovery can’t be accomplished through introspective discernment alone. We have to try things.

That’s why, in his view, it’s OK to quit. Such experience will never be wasted as long as it teaches us something — about ourselves and about the wicked world that could offer a breakthrough in our next professional incarnation.