Too often, I focus on the “what” and “when” of Notre Dame history and ignore the “why.” For that reason, I am thankful for two books about Notre Dame football I received last year as Christmas gifts.

Two Million Bricks in 160 Days by William Reifsteck and Coach For a Nation by Jim Lefebvre do an excellent job explaining how the success of football during the Knute Rockne era gave shape and girth to the campus during the 1920s and 1930s.

One revelation sticks out: In 1924, the local police chief blamed Notre Dame students for violence at the Ku Klux Klan rally in downtown South Bend. As a result, the University became concerned for the safety of the hundreds of students living in rented rooms throughout the city. That is why dormitories and the South Dining Hall were built before the stadium construction began in 1929. 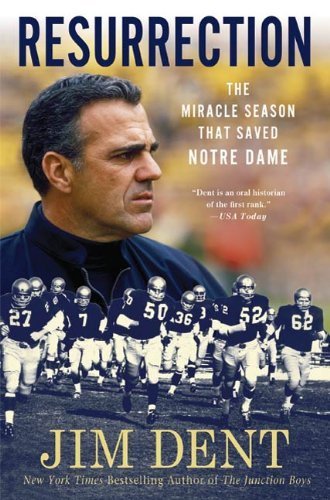 I’m glad I read those two books. They both lack a certain elegance in writing style but are packed with information on events nearly a century old that affect the campus still.

The book I’m re-reading now is Resurrection: The Miracle Season That Saved Notre Dame by Jim Dent. I read it first about five years ago and boisterously recommend it to fellow alums I meet during the reunions each summer.

It is particularly poignant now with the death of legendary football coach Ara Parseghian.

Dent has two main purposes. One, he chronicled the amazing 1964 Notre Dame football season. Ara, in his first year with the Fightin’ Irish, inherited a team that finished 2-7 in 1963 and led it to a 9-1 finish.

And two, he showed Ara’s unique ability to recognize and maximize whatever talents his teams had.

In the years before Ara arrived, Notre Dame committed to the Elephant Backfield concept. In theory, the 240-pound running backs (Pete Duranko, Paul Costa and Jim Snowden) would be like battering rams, too big to tackle. But opposing coaches simply plugged the middle with linebackers to squash interior runs, knowing the elephants were too slow to break wide to the open field.

At spring practice, Ara put the elephants where they belonged, on the defensive line. That opened the door for Nick Eddy and Bill Wolski to add some zip to the running game. Ara noticed an underused reserve halfback named Jack Snow and turned him into a split end. He saw strong-armed John Huarte, a third-stringer in 1963, as the gunslinging quarterback who could put it all together.

Huarte made the most of his one year as a starter, earning the Heisman Trophy. Snow caught 60 passes for 1,114 yards and nine touchdowns. Wolski and Eddy combined for 1,629 offensive yards and 18 touchdowns.

Just as importantly, Ara challenged the culture at Notre Dame. Football players had become comfortable losing football games and blaming it on inept coaching. Under Ara’s watch, players were going to have to take responsibility for themselves.

One tale Dent tells is of a talented player named Dave Pivec, who was arrested for drinking and fighting. Ara warned that he would be kicked off the team if it happened again. It did, and much to his teammates’ surprise, Pivec was sent home.

“I hated to let a player like Dave go,” Parseghian told Dent. “He was a hitter and I could have used him. But kicking Dave off the team unified the team. I could see the players walking a little taller. They knew that we were serious as we could be about turning this team around.”

If you’re an Irish fan, you know for a fact that crooked referees handed the final game of 1964 to Southern Cal, ruining Notre Dame’s quest for a perfect record. What you probably haven’t heard was the conversation Ara had with his assistant, Tom Pagna, as thousands of students, alumni and fans met the team buses when they returned to campus.

“You don’t know how much this means to me, Tommy,” Parseghian said. “They basically kicked us out of Northwestern. I wanted us to win it all at Notre Dame.”

“We will someday,” Pagna said. “This is only the beginning.”

The soaring message of Resurrection transcends football — the lessons from Ara can be translated into any workplace — and Dent’s comments from his publication date in 2009, the end of the Charlie Weis era, still require consideration:

“I’m not so sure that Notre Dame football will ever save itself from this current rut of mediocrity. Those interested in doing so should read every word of this book. Parseghian drew a terrific blueprint to success in 1964 and, believe me, it would work today.”