“You’re a poopy head,” some say in tweets and Internet comments. OK, the foul tirades go beyond the language a 5-year-old might use, but the messages are a match in eloquence.

The malicious invectives spewing forth online these days make me long for the era when contempt had some class. I have a particular fondness for the Brits, who seem to be masters at delivering an inventive evaluation. Winston Churchill, for instance, supposedly said about one of his adversaries, “He occasionally stumbled over the truth, but hastily picked himself up and hurried on as if nothing had happened.”

Even some U.S. politicians have enjoyed that clever gift of jab. Ann Richards, the former governor of Texas, once took this shot at George H.W. Bush: “He was born with a silver foot in his mouth.” 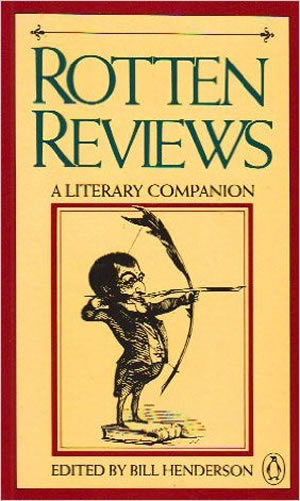 But in the world of literature, as Bill Henderson says in Rotten Reviews: A Literary Companion, “The truly malicious review was a rarity.”

So when it comes to criticism, deserved or not, I discovered a breath of fresh (read: clean) air in Rotten Reviews, which was published in 1986. Editor Henderson followed it with Rotten Reviews Redux: A Literary Companion in 2012.

An introductory essay by Anthony Brandt, himself an author and book review editor, offers an insightful, amusing and even, at times, distressing set-up to the subject of reviewing. Brandt traces the practice of literary reviews all the way back to Aristophanes, the Greek playwright of ancient times who enjoyed taking his fellow dramatist down a notch, and takes a close look at a period in the 1840s when publishers in the United States paid newspapers to print positive reviews.

It is Brandt’s psychological take on the art of reviewing that truly resonates, as he considers the fraught perils of passing judgment. He showcases tussles between writers and reviewers — “one irate author threw a Reviewer I know down a flight of stairs” — and points out that “the enemies one makes writing reviews will almost inevitably seek revenge if one should be so foolish as to publish one’s own books.” Reviews generally have only a “small impact” on sales, he says, and, tragically, some reviews have driven an author to suicide.

As a reviewer, Brandt gives himself and his fellow critics only a small break. Those “ill-paid, despised all around” folks, he writes, are called upon to judge, and “it takes a certain courage on their part to be willing to be wrong.”

Here then, are a few highlights of those we now judge to be in the wrong:

“Sentimental rubbish . . . Show me one page that contains an idea.” — a review of Tolstoy’s Anna Karenina

“Whitman is as unacquainted with art as a hog is with mathematics." — a review of the poet’s “Leaves of Grass”

Even the great Shakespeare did not escape:

“One would image this piece to be the work of a drunken savage." — a review of Hamlet

Although editor Henderson refers to the reviews in the book as focusing on those works “unjustly trounced,” I have to admit that I agreed with a few of the rotten reviews of classic literature. They called to mind novels I was assigned to read in English classes and struggled to finish — the lugubrious Wuthering Heights comes to mind — and plays that literally put me to sleep during their performance. Major Barbara, I’m looking at you.

But that’s part of the joy of this book. One can feel free to agree with the rotten reviews without being publicly shamed.