“We wanted to write the kind of high-tech hard-science thriller where you can’t just make up stuff to solve your problem — where you have to deal with the real lemons that life hands you, to make your lemonade,” John Sandford and Ctein say in the authors’ note that appears at the end of Saturn Run. In other words, they wanted their rocket science to be correct. Ctein, who apparently is known for his photography and science writing, although I had never heard of him, was responsible for the mechanics of that. 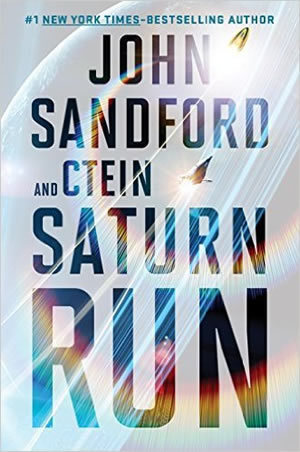 Sandford is known for his crime novels featuring Lucas Davenport and Virgil Flowers, and I definitely had heard of and enjoyed his work. The book jacket, which promises a story that lives up to Sandford’s talent for “electrifying plots, rich characters, sly wit, and razor-sharp dialogue,” convinced me to take the almost 500 page Saturn Run trip.

I should know that you can’t judge a book by its cover notes.

The plot kicks off with a Caltech intern’s discovery in 2066 of what can only be a gigantic spaceship decelerating as it approaches Saturn. The beings responsible for this starship seem to be ignoring Earth — a good thing — but they also possess an advanced technology that the USA would love to get its hands on. As would China.

And so the two superpowers begin a race to Saturn, a trip that in this future time will take about six months, hoping either for first contact with the aliens or the chance to learn about their superior technology.

To avoid spoilers, I’m bringing this plot summary to a screeching halt here. And unless sentences such as “It melted radiator alloy, a eutectic blend of aluminum, magnesium, and beryllium that liquefied at six hundred degrees Celsius,” make your inner rocket scientist happy, you, like me, might be tempted to bring your reading to a halt.

But I kept going, skimming much of the technical detail and enjoying sections I identified as trademark Sandford, although they were not as captivating as the blurb writers would want readers to believe. Ultimately it was an okay story, mixing a space race with a geopolitical thriller and adding a few unexpected twists.

Finally, at page 477, I reached the authors’ endnote, the one that explains why Sandford and Ctein included all the technical detail, what they felt it added to the story. Oddly enough, it was this essay that made me happy I’d stuck with the book. The co-authors’ discussion of their writing choice offered a peek into the minds of two distinct storytellers and gave me an idea of what the subgenre called hard science fiction entails.

I realized then that what I saw as the fault in the novel didn’t actually lie in the techno-talk, which is the basis of hard science fiction. In the end, Saturn Run was simply an unwieldy mix of styles that failed to launch.