When the news broke about Hollywood producer Harvey Weinstein’s nefarious treatment of women, I had one question: What took so long?

Weinstein was a golden boy. He produced a long list of movies that enjoyed both critical and financial success, including The English Patient, Good Will Hunting, Pulp Fiction, Django Unchained and 1999 best-picture Oscar winner, Shakespeare in Love. 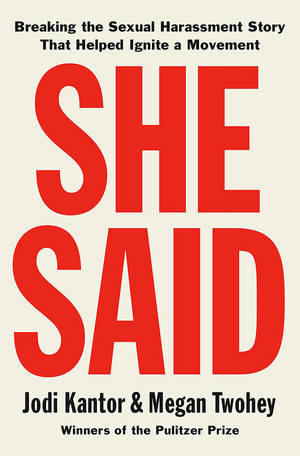 The golden boy lost his glow on October 5, 2017, when The New York Times ran a story by Jodi Kantor and Megan Twohey that detailed sexual abuse allegations against Weinstein. From there, all hell broke loose. Within a month, more than 80 women went on record with declarations of sexual misconduct they suffered at the producer’s hands. The #MeToo movement began, and suddenly other powerful men were called to account for past misdeeds.

As more details of Weinstein’s behavior emerged, it was clear that his slimy conduct dated back decades. And that’s when I began to wonder how he got away with it for so long.

I now have the answer, thanks to Kantor and Twohey’s book, She Said: Breaking the Sexual Harassment Story That Helped Ignite a Movement.

In one continuing storyline, the two reporters detail their attempts to uncover the truth about the rumors they kept hearing about Weinstein and his exploits. Even better, their eye-opening account goes beyond one man’s abusive actions to look at the bigger picture, as Kantor and Twohey were tasked by their editors at the Times “to go beyond individual wrongdoers and pin down the elements, the system, that kept sexual harassment so pervasive and hard to address.”

The reporters quickly learned that their investigation would be much more difficult than they had imagined. Some actresses who had complained about Weinstein’s abusive behavior did not want the article to focus on them and their experiences and would not go on the record.

Eventually Kantor and Twohey discovered the paramount element of the system that appeared to protect Harvey Weinstein: Several women who apparently had suffered from his blatant harassment had accepted cash settlements and signed confidentiality agreements. These out-of-court settlements, or NDAs, nondisclosure agreements, were “standard practice for dealing with sexual harassment, and often one of the only ways of dealing with it at all.” The victims realized that reporting the abuse would only get them fired or ruin their careers, so they accepted the only compensation available to them. But they also accepted the fact that they could never reveal what their abuser had done.

After months of getting nowhere, with actresses and Weinstein employees refusing to return calls, with no information they could use in print, Kantor and Twohey finally were given the key. A Weinstein Company official, Irwin Reiter, leaked a 2015 memo written by Lauren O’Connor, a junior executive, that detailed a pattern of Harvey Weinstein’s continual verbal and physical assaults on women. The memo, which had been read by members of the Weinstein Company’s board of trustees, made it clear that Harvey’s actions “corrupted the company.”

The memo could be used in the Times article, but the reporters still needed a name. In fact, they needed a few named sources. “The pattern that had protected Weinstein for decades — no actress wanted to be the one to speak up and name Weinstein — still held,” they write.

How and why the logjam eventually was broken is a big part of the story of the two reporters’ investigation. She Said may sound like a boring tale of the months two journalists spent attempting to document an entrenched system of sexual harassment. On the contrary, it is a riveting tale of how power works in the entertainment industry, of how difficult it is to earn justice when one’s career is being threatened by a man whom no one seems able to prosecute.

Now I know why it took so long for Harvey Weinstein to be called to account: A man who knew how to use his power to silence women; a company and a legal system and shady lawyers and private investigators that protected that man; legal settlements that offered “cash for silence.”

As Kantor and Twohey write, “If the story was not shared, nothing would change.” Life has changed for Harvey Weinstein, who in May 2018 was charged in New York with rape and other sexual misconduct offenses. It remains to be seen whether the systems that keep “sexual harassment so pervasive and hard to address” will change.