A paperback I’d recently bought rests close at hand, a new ebook languishes on my Kindle, a hefty hardback I’d treated myself to as a birthday present sits stolidly in the bookcase. It has been eight weeks since my mother died; eight weeks since I dutifully began administering her estate.

For eight weeks, those books that once called my name have remained silent.

Finally, as my grief quieted to a dull throb and the fiduciary obligations began to ease, the idea of reading, of finding refuge in a story not my own, once more seemed possible. But reading an entire book was still daunting. How could I immerse myself in the lives of others when I could barely tread water in my own? 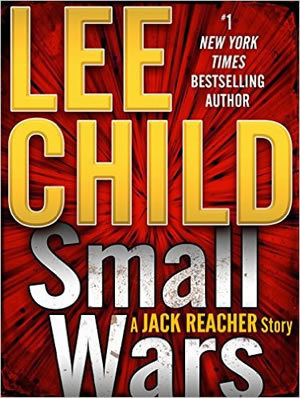 Enter “Small Wars,” a short story featuring Jack Reacher. Odd choice for a former lit major, yes? Reacher, protagonist of 19 Lee Child books, is a drifter, a loner, a former military police officer who champions the downtrodden, usually with his fists. In other words, your basic bad-ass guardian.

Since I’ve read all of the fantastically popular Reacher novels, even watched the movie starring the miscast Tom Cruise, I knew this story would not strain my brain. Nor, at 44 pages, would it require a huge investment of time. It seemed the perfect choice for re-entering the joy and solace of reading: familiar world, familiar character, familiar myth. The Western hero, redefined for today.

The well-written “Small Wars,” is set in 1989, when Reacher is still in the military. It follows the MP as he investigates the shooting of a young lieutenant colonel in the backwoods of Georgia. When I finished the story, I went back and reread parts of it, awed again by the author’s ability to cleanly drop clues while serving up a clever finish.

The ebook also contained the first chapter of the upcoming Reacher novel, Make Me, to be released this month. I read the preview, too, and can’t wait for the novel.

Those other more literary books still wait for me. And some day, when my mind is a little clearer, my focus a little sharper, my mood a little less fragile, I’ll pick one of them up, ready again for my emotions to be stirred by powerful stories. But not yet.

For now, I am comforted by a present-day Western hero who fights the good fight, rights the ruinous wrongs, saves the devastating day. Call Jack Reacher what you will, a cliché, an archetype, a pop-fiction success. I call him a lifeline — a steadfast anchor in a world that has become unmoored.