I’m writing this piece under the threat of public humiliation.

A few months ago, I told a fellow editor I had purchased a book that I thought would make a great subject for a “What I’m Reading” post. A week or so later, my wife and I packed all of our things into boxes and moved into a new house. When I eventually unpacked the boxes with the word “Books” scrawled across them, my new book was nowhere to be found. I shrugged and assured myself it would turn up. 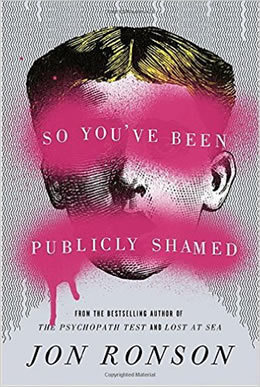 It didn’t, and my editor, tired of waiting for the piece I had promised months ago, jokingly said she’d take to this website to publicly expose my welching if I didn’t submit the story soon. A few days later, my wife found the book in a rogue box, the type filled mostly with things you don’t actually need that end up making move after move without ever getting unpacked. I’m lucky she did. After reading Jon Ronson’s fascinating, funny and at times frightening new book, So You’ve Been Publicly Shamed, I fully appreciate the extent to which public shaming can shatter someone’s life.

The book was inspired by Ronson’s own relatively minor run-in with public shaming. In January 2012, he discovered a fake Twitter account claiming to belong to Jon Ronson passing along nonsensical and at times inappropriate messages. Worried that some people might actually think he was responsible for these tweets, Ronson, a New York Times bestselling author, attempted to get the people behind the fake account to cut it out. He eventually arranged a face-to-face meeting in London with the perpetrators and filmed their hour-long conversation. When they still refused to take down the account, he posted the footage to YouTube, shared it on Twitter and watched as the masses chastised his tormentors. Within days, the fake account was deleted.

This experience led Ronson to reflect on other social media shamings he had participated in or simply observed as an amused spectator. Soon, it inspired him to contact some of the people who had suffered the most in recent years from similar Twitter- or Facebook-fueled humiliations.

There was Jonah Lehrer, the once fabulously successful “pop-psychology” author and New Yorker writer, who was exposed as a plagiarist and later viciously mocked on Twitter while giving a speech trying to reclaim some semblance of his reputation. Justine Sacco, an unknown New York publicist, hit send on a tweet (“Going to Africa. Hope I don’t get AIDS. Just kidding. I’m white!”) while waiting for her plane to take off for Cape Town. By the time she had landed, she was trending on Twitter worldwide, as millions of people had reacted to what they saw as a revolting, racist sentiment. (Sacco later claimed it was a poorly phrased but well-intentioned attempt at satire.) Lindsey Stone, a social worker who worked with adults with learning disabilities, liked to pose for outrageous, silly photos, like the one of her smoking in front of a no-smoking sign. One day, her friend shared a picture on Facebook of Lindsey holding up her middle finger and pretending to scream while standing in front of a sign that read, “Silence and Respect.” The sign was posted in Arlington National Cemetery. Lindsay’s photo soon went viral, and her reputation went with it.

All three (along with several other people chronicled in the book) lost their jobs. The psychological consequences were even worse. Ronson’s conversations with them post-shamings can be difficult to read.

He didn’t reach out only to those whose lives had been crushed by public shamings. Ronson also examines examples of the outliers who had actually emerged relatively unscathed from what should have been vicious public embarrassments. He traces the roots of public shaming in history, examines some of the research behind it and studies how public shaming is effectively deployed in courtrooms. He chats with an Internet troll who proudly boasts of her exploits in public shaming. He even reaches out to a reputation management company that — for a hefty sum — can make sure negative stories disappear from the first page of a person’s Google search results.

The end result is a rollicking journey through the world of public shaming. It’s also a cautionary tale about the dangers of social media in our increasingly digital age. Anonymous, decent people can have their lives ruined by the click of one send or share button, as seemingly innocent remarks or jokes are served up on a platter to the Internet’s never-ending appetite for outrage and scolding.

You could make a case that So You’ve Been Publicly Shamed should become required reading for today’s high school or college students, who have grown up in a world where it’s common to share private opinions and inside jokes with the very public world wide web. And maybe it should also be required reading for disorganized writers who sometimes miss their deadlines.