Comic Patton Oswalt told The New York Times Book Review that Spoiled Brats by Simon Rich was the last book that made him laugh. If clever Oswalt, husband of Michelle McNamara ’92 and friend of Notre Dame Magazine, enjoyed this collection of 13 stories, I thought it was worth a look.

And it was. Simon Rich’s take on the world of such millennial touchstones as participation trophies, helicopter parents, artisanal foods, blogs, hipster cool, student loans and Adderall is inventive, satiric and often simultaneously hilarious and touching. 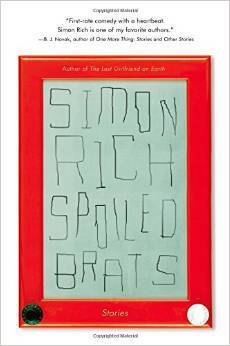 The first story, “Animals,” offers as a narrator the recently widowed male hamster with the humiliating name of Princess Jasmine. The rowdy kids in the private-school classroom often forget to feed their class pet, who comments acerbically on the daily arrival of “the gremlins . . . hopped up on Pop-Tarts and primed for violence.” The author even pokes fun at his younger self: “Simon is 2K’s ‘class clown,’ a pudgy, hyperactive boy with some kind of undiagnosed emotional problem,” Princess Jasmine declares.

Rich’s gimlet-eyed fun is just beginning, as he uses gorillas, ghosts, the angel of death and even “Elf on the Shelf” to tell the stories of a society awash in spoiled brats, earnest and struggling young adults who seem unwilling to accept life’s nastier lessons.

After pursing his dream for five years, for instance, a musician in the story “Big Break” ponders his efforts: “He’d never admitted it to anyone, but lately he’d started having doubts about the band. When he first moved back home after school, he genuinely believed the situation would be temporary. He assumed he’d be on tour most of the summer and that, within a year at least, he’d be supporting himself with his music. It ended up taking him three years to organize a tour — a nine-day trek across the Midwest. And between the van and the gas, he’d lost money.”

The highlight of the book is “Sell Out,” a comedic masterpiece of generational, historical and societal differences that, as Oswalt says, “Just loving nails everything repellent and beautiful about millennials.” When Herschel Rich, who has been pickled in brine for 100 years, finally awakens in today’s Brooklyn and meets his great-great grandson, Simon (yes, the author, and, yes, you just have to go with it), Herschel’s cultural education zings with sharp insights.

To help his newly formed business survive, for instance, Herschel quickly learns the value of interns: “You cannot murder interns, but other than that, they are the same as mules. You can rob them, abuse them, debase them. There are no limits. When a man agrees to be intern, he is saying, ‘I am no longer human being with rights, I am like dog or monkey. Use me for my labor until my body breaks and then consume all of my meats.”

What people find humorous varies, and not all the stories in Spoiled Brats will hit the mark for every reader. But if you need an infusion of funny, the former Saturday Night Live scribe’s stories are worth a shot.