We read Zadie Smith in my Creative Non-Fiction class at Notre Dame last year. In that same class we did an exercise on the diversity of our literary canon. The professor had us pick the seven writers we found to be the most important to us (novelists, journalists, lyricists, etc.). Then he had us fill in their lifespan, nationality, ethnicity/race, sex/gender, sexual orientation, religion and class. He next asked if anyone’s list contained four or more people of color, women, those spanning the LGBTQ spectrum or working class. Only one in a class of around 15 could raise a hand.

The professor assured us that this was not a shaming exercise; the point was to become more conscious of how our unseen influences shape our perceptions and our writing. 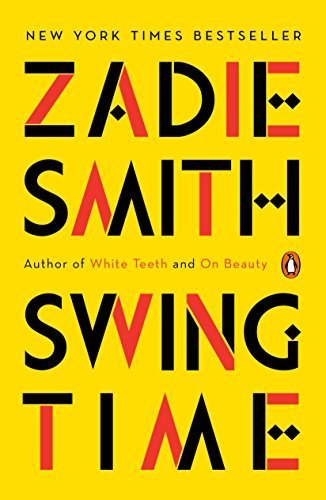 The canon we read is overwhelmingly beige — when I offered to review this book, the editor was excited that I would blog about a novel by a person of color. This isn’t only a problem in our literary canon, however. This is a problem in all media. It’s also a problem in our representation of history, as witnessed in the unrest surrounding the removal of the Robert E. Lee statue in Charlottesville, Virginia, this summer.

Swing Time digs into this, with class differences at the center of the story and race also playing a factor.

Smith delves into the lives of two girls growing up in London’s public housing, the boisterous Tracey and a more reserved unnamed narrator. The two meet in a local dance studio and immediately become friends after realizing they are the only “brown” students in the class.

Identity brings the two girls together, despite family dynamic and class differences. The two attend a white classmate’s birthday party but are picked up early by the narrator’s mother after the birthday girl’s mom sees them dancing “provocatively” to the music of a pop star named Aimee. The girls grow apart but often reunite throughout the course of the book as it continuosly explores class, friendship, fandom and role models.

The characters in Smith’s book forge their own canon in a world where they don’t match history’s representation. The two girls rehearse Michael Jackson’s moves during recess, and Tracey is convinced her rarely seen father is one of his backup dancers. The narrator’s college boyfriend, Rakim (he renamed himself after the rapper), prides himself on educating his peers on black history and believes Shakespeare’s dark lady was actually of a dark complexion.

Whether these stories are true or not isn’t the point — it’s the fact that these stories are told. This is part of what fueled the intensity surrounding the Robert E. Lee statue in Charolettesville — people argued that it was an insult to history because the history we know has been filtered through straight, white men and fed to us in books. Black Americans are surrounded by statues of their oppressors, magazines depicting white standards of beauty and libraries stacked with the same points of view.

Smith does an excellent job showcasing this through the two young girls’ actions: their celebration when they see Jeni LeGon, a black dancer who resembles Tracey, in an Ali Baba VHS tape, or the narrator’s ongoing feud with her politically incorrect Arabian boss at a pizza shop — they pause dough-flipping to cheer on their race’s respective tennis players.

Although different characters throughout the book address race representation — the narrator’s mother is a social activist, Rakim a radically driven educator — the narrator has perhaps the most interesting take:

“If Fred Astaire represented the aristocracy, I represented the proletariat, said Gene Kelly, and by this logic Bill ‘Bojangles’ Robinson would have been my dancer, because Bojangles danced for the Harlem dandy, for the ghetto kid, for the sharecropper — for all the descendants of slaves. But to me a dancer was a man from nowhere, without parents or siblings, without a nation or people, without obligations of any kind, and this was exactly the quality I loved.”

She goes on to describe the classical recordings at dance class that Tracey calls “white music” and her idea that “there was something not quite right about her rigid notions — black music, white music — that there must be a world somewhere in which the two combined.”

The book transitions from childhood tales in London to the narrator’s job as an assistant with Aimee, a Madonna-esque performer and an idol of the two girls when they were younger.

The book is divided into seven parts with chapters switching from flashbacks to the narrator’s present-day career in both New York and travels to Africa for Aimee’s charity outreach efforts. At times the book can become convoluted with the chapter switching — especially since, at 453 pages, Swing Time is not a page-turning one-sitting read.

However, the effect this lends mirrors how the narrator must feel traveling to and from the village in Africa, Aimee in New York City and her family in London or the many moving parts of the musicals the narrator loves so much.

So go pick up Swing Time and rejoice in its robust storyline — then place the book on your shelf and do your own experiment of representation.

Erin McAuliffe was an intern at this magazine in spring of 2017 and is an incoming associate at Ogilvy & Mather in Chicago.