Richard Russo is a favorite author of mine. And That Old Cape Magic reaffirms the reasons for my admiration.

It’s about real people, authentically and richly cast, leading familiar lives, coping — as we all do — with the trials and triumphs of real life. 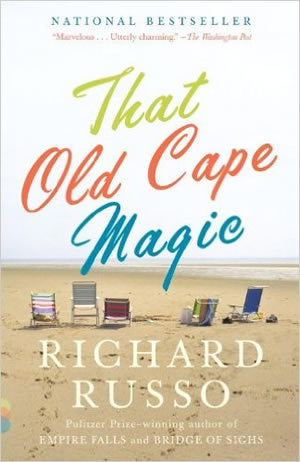 His characters are ordinary folks but endowed with the layers and nuances that make them as interesting as people we know. They have a depth and honest complexity that rings true, gives them appeal, entices you to hear their story.

And those stories are largely ordinary — nothing flashy or fancy, no extra heapings of drama or page-turning suspense. In Russo’s world the twists and turns of the narrative — while bringing a smile or a sigh or “oh no” — are less important than the characters and their interior climate.

Real people inhabit his books. His storylines read like the subtle unfolding of life itself.

In That Old Cape Magic, Jack Griffin, the book’s protagonist, is in his middle years and trying to make sense of his life as a writer with serious aspirations doing hack work for Hollywood. He’s also grappling with a stale and troubled marriage while processing the loss of his daughter — in marriage.

But it could just be that his life’s heaviest burden is his own parents — a pair of East Coast academics with their own lofty scholarly ambitions whose disappointing lives took them to a state school in Indiana and a mundane life of unmet expectations. Their unhappiness and lack of parental affection still plague Griffin and his marriage in the middle years of his life.

His father’s ashes spend most of the book in the trunk of his car, waiting to be dumped into the sea. And occasional conversations with his mother — on the phone and in his head — provide the book with a good deal of its humor, poignancy and truth.

This theme of one generation bearing the sins of its forebears (a condition that also afflicts Griffin’s wife, Joy, leading the couple to debate which set of parents intruded more deeply and destructively into their children’s marriage) is not often examined in literature with such adroit sensitivity. Russo thoughtfully yet deftly explores this dynamic as Griffin and Joy try to find personal health and happiness as well as health and happiness as a married couple.

Contributing to the real-life knots of the family fabric are second spouses for parents; Jack and Joy with new (even if temporary) partners; and the young man who secretly pines for their daughter, who is marrying someone else.

While the book deals with these characters over time — mostly through smoothly integrated flashbacks, reflections and memories caught in conversations — the constant is Cape Cod itself. Jack and his parents vacationed at there every summer, renting various beach houses. Jack and Joy honeymooned there. And the next generation’s weddings take place there, bringing everyone back to the cape for the memorable, eventful times in their lives — including the ritualistic disposal of ashes.

That Old Cape Magic is less ambitious than Empire Falls, which earned Russo a Pulitzer, and perhaps Bridge of Sighs, which some critics said could have used a more rigorous editing. And it may not have as appealing a lead character as Sully in Nobody’s Fool, charmingly brought to the screen by Paul Newman. And it may lack the humor and incisive knife of Straight Man.

But it is vintage Russo. Beginning with Mohawk in 1986, Russo has written about seemingly real places, creating a mood that feels right in each locale, populating his novels with regular people who lead unremarkable lives. Yet he subtly depicts life as a parable, with lessons and irony, humor and truth. His books read easily but get beneath the surface, give you things to ponder and realize and understand.

That Old Cape Magic, like his others, blurs that line about life imitating art or art imitating life. In his work the two are nearly indistinguishable.