I haven’t always read comic books. It wasn’t until just after I graduated from Notre Dame, when I became a managing editor for the now-defunct DestroyTheCyb.org and started a column called “Comic Virgins.” Each week or two, I’d read a few new comics from a particular series and write up my thoughts.

It’s hard to put my finger on the pulse of comic readers because the depth and breadth of this group is so vast. Folks of all ages, genders, races, nationalities and socioeconomic backgrounds find a home within the pages of comic books — especially in the past two decades as publishers, editors, writers and artists have made a conscious effort to increase the diversity of their heroes and other characters. 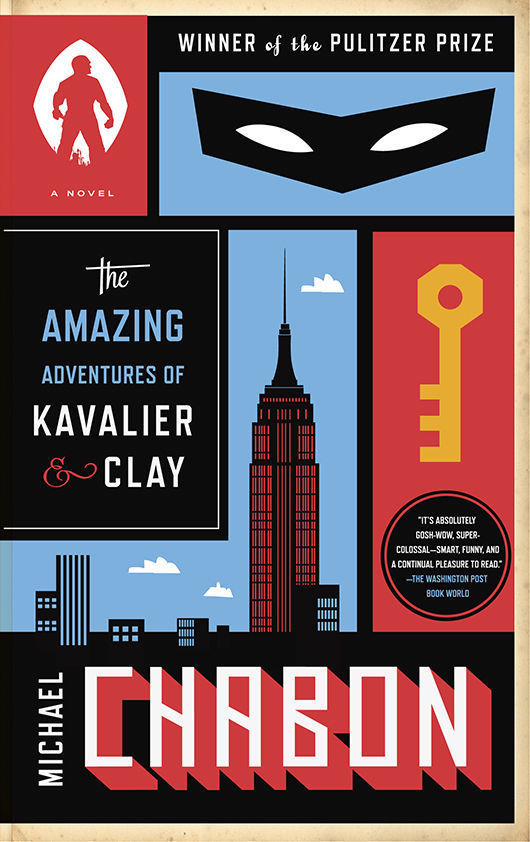 What unites all of the greatest comic heroes is found in the quintessential comic book storyline: the origin story. Everyone comes from somewhere, and perhaps we, mere mortals, are drawn to this oft-used plot device because we strive to see ourselves in those humble beginnings. We hope for our own superhero transformation. In The Amazing Adventures of Kavalier & Clay, the Pulitzer Prize winner for fiction in 2001, novelist Michael Chabon offers not only a roots tale of the comic-book genre, but the genesis of the creators themselves. Chabon’s characters are men — and a singular lead woman — who become comic book-esque heroes in a story that grabs you from the very beginning.

The story follows young artist Josef Kavalier and his enterprising cousin Samuel Klayman (known to most as Sammy Clay) in the years following Kavalier’s flight from Nazi-controlled Prague in the late 1930s. Kavalier comes to stay with the Brooklyn-born Clay, who’s tasked with getting Kavalier a job at the magazine where he works. The story follows them through and after World War II, charting their creation of comic book characters and the relatable hardships of their own lives — loves lost and found and the growing up we all do in our 20s and 30s, long after we’re considered adults.

I truly don’t want to spoil anything, so that’s all the plot synopsis you’ll get from me. Please, trust me and take this journey. Even if you know nothing more about comic books than Clark Kent and Superman, you’ll appreciate this tale of ingenuity, heartbreak and the strength it takes to keep living in the face of stomach-churning disaster.

Chabon’s most impressive quality is his consistently superb diction. He chooses great words that elevate this novel above the typical fare pandering to the Barnes & Noble crowd: words like cenotaph or nimbus or acromegaly or obelus. Pulling out the dictionary is worth it.

He also has this fantastic knack for leaving out the boring bits. Just as a storyline seems like it might become a slog, the reader finds herself jumping ahead five years, on another continent, following a different character, or reliving the same scene but through new eyes, opening up a different understanding of each character’s actions. [Insert wistful sigh here.] If only more writers did this. Chabon’s technique is refreshing and adds depth to his entire cast of characters, rather than following one protagonist through the whole story.

An example: at one point, Kavalier enlists in the Navy after the attack on Pearl Harbor. Up to this point, the book is fast-paced, and some concern might set in that you, dear reader, will be going along with him to boot camp, bringing the narrative to a halt. Instead, Chabon wisely skips the whole Navy experience as incidental to Kavalier’s life narrative, checking back in with him years after the fact.

Beyond the heroes’ origin story, Kavalier & Clay embraces a few other comic-book tropes: magic, mystery, romance complete with scintillating smooches, hidden identities, villains, dastardly deeds and redemption arcs. It goes a bit further, though, and includes something few comics do: a satisfying ending with no cliffhanger.

Well, I take that back; there might be one building-edge-hanger. . . . You’ll just have to read Chabon’s novel to find out.

Amanda Gray is the web content editor at Notre Dame Law School. Find her on Twitter @TheAmandaGray or email her at agray3@nd.edu.