An innocent boy on the courthouse steps. An iconic ballplayer, guilty and ashamed and honest enough to be straight with him.

“Well, I’d never have thought it.” 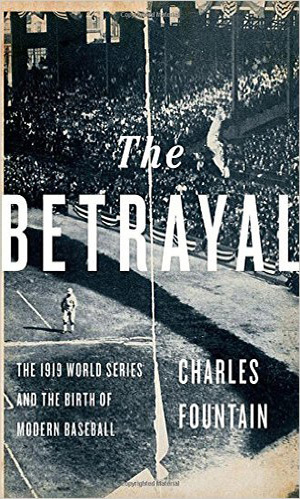 Among dozens covering the trial of eight Chicago White Sox players accused of conspiring with gamblers to lose the 1919 World Series, only Hugh Fullerton reported that exchange between a “little urchin” and Shoeless Joe Jackson.

Like so much of the received wisdom associated with the sordid Black Sox episode, it probably never happened. Evidence suggests, Charles Fountain writes in his new book, The Betrayal: The 1919 World Series and the Birth of Modern Baseball, that Fullerton “made it up.”

Plenty of other reporters picked up Fullerton’s account and, like a game of telephone, recast the boy’s words until they became the naïve and plaintive, “Say it ain’t so, Joe,” reverberating through the ages as the cry of disillusioned fans.

If not for its enduring fame, one figment of a reporter’s imagination would be the least of the historical embellishments that deserve skeptical reconsideration in the Black Sox story. But it illustrates Fountain’s challenge in revisiting the drama.

Almost a century of obscuring silt has left few nuggets of pure fact. He sifts dutifully and comprehensively, concluding often, as he does on the accuracy of the “Say it ain’t so” story, that “it will remain forever an unsettled argument.”

That can be unsatisfying as a reader and maybe explains the power of accounts like Eight Men Out, the 1963 Eliot Asinof book and 1988 movie that purport to be more conclusive. In what Fountain calls the “best known if also the least reliable book on the subject,” Asinof crossed the line into fiction.

The author acknowledged inventing a character, a gambler’s goon who threatened pitcher Lefty Williams, in a scene set in Chicago while the White Sox were, in fact, still on a train from Cincinnati.

No small part of Fountain’s task in The Betrayal, then, becomes the thankless effort of casting doubt on details embedded in the popular imagination. Losing a little melodrama, and perhaps with it some page-turning pace, is a small price to pay for an honest grappling with the complicated events and personalities involved.

First baseman Chick Gandil serves as the only unvarnished villain, the conduit between his teammates and the gamblers who wanted to buy them off. Those who agreed to fix the series did not receive the entire $10,000 they each were promised, believing Gandil had stiffed them, not the gamblers.

Most of the conspiring players did not look like they were lying down on the field. Shoeless Joe Jackson was the best hitter in the series and played errorless defense. Pitcher Eddie Cicotte, who seems to be the only one burdened by conscience, lost two games in the series but did win one and had a respectable overall earned-run average under 3.00.

Rumors swirled before the series about a fix — a baseball commonplace at the time and for decades before — and Fullerton appointed himself to perform surveillance. He circled suspicious plays on his scorecards, questioning only seven in the best-of-nine series that the Cincinnati Reds won five games to three.

Both Jackson and Cicotte admitted to taking the gamblers’ money. They confessed after believing they were offered immunity from prosecution and retracted when they were ultimately indicted.

Eight White Sox players in all were charged, tried and acquitted by a jury. Nevertheless, baseball’s first commissioner, the imperious federal judge Kenesaw Mountain Landis, banished them from the game anyway, saying their failure to report knowledge of the fix to team officials was guilt enough.

Landis only occupied the commissioner’s seat that he imbued with such authority because of a power struggle between White Sox owner Charles Comiskey and American League president Ban Johnson. Their personal animosity helped keep the allegations from fading away, as others before 1919 had, and made the Black Sox history’s scapegoats for a much older and more widespread gambling subculture in baseball.

The broad outline of the scandal is familiar, but Fountain makes clear that questions of exactly who was involved; how much, if anything, they received; and whether they lost honestly or intentionally remain unresolved.

He’s not out to absolve the players, but he is operating as a dispassionate observer, not a besotted fan or an offended steward of the game. The Betrayal complicates a story that others before him took sometimes imaginative pains to simplify.

Evaluating the evidence in detail leads Fountain to one overriding (in)conclusion: What we think we know ain’t necessarily so.