Rowing competitively demands you push yourself when your well-conditioned muscles demand a break, past whatever limits you thought you had. At the same time, it requires you to think and move as one with your teammates. One bad pull takes you out of sync and slows the boat’s progress, but working well with the people around you makes for a smooth outing. 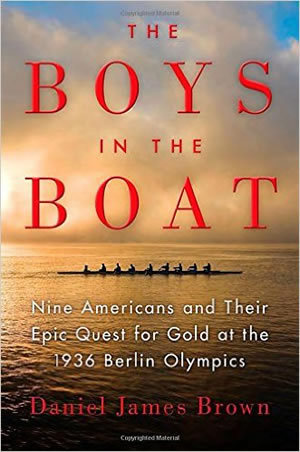 I have no firsthand knowledge of this, having never once sat in a racing shell. But I learned a great deal about grit and teamwork from reading The Boys in the Boat: Nine Americans and Their Epic Quest for Gold at the 1936 Berlin Olympics by Daniel James Brown. The book tells the story of the University of Washington men’s crew team that won the gold medal in the 1936 Olympics, beating the best athletes Hitler’s Germany had assembled and inspiring generations of athletes.

Brown’s textured storytelling communicates the strenuous demands of rowing, the desperation felt across America during the Great Depression, and the growing menace of Hitler’s Germany in the years leading up to World War II. It captures Seattle’s underdog status as a sports town and takes readers inside the growth of the Washington rowing program built by longtime coach Al Ulbrickson.

Brown tells the story largely through Joe Rantz, the Washington rower who grows up prizing self-reliance as he forces himself to move past multiple setbacks. Abandoned as a teen by his father and stepmother, he forages for himself, making ends meet through a succession of odd jobs that continue as he pays his way through the University of Washington, where he also must navigate classes and life on the crew team. Although he is a strong and talented rower, Rantz is very much the outsider, scarred by years of having to make it by depending only on himself.

This shows from time to time on the water. Over the next few years, Rantz and a handful of teammates exhibit flashes of brilliance that propel them ahead of more experienced rowers at Washington; ahead of their arch-rivals at the University of California; and ahead of the established East Coast elite schools who were initially favored to dominate larger competitions.

But setbacks constantly follow the good showings. The crew often rows poorly following a big win, frustrating their coach and leaving their status often in question. Will they row in the varsity boat at the next competition? Can they beat California? And, if all continues to go well, can they reach the ultimate goal — winning the gold medal in Berlin?

To do that, they have to learn not only to push themselves to their individual limits but also to row as one team. This slow realization is captured in a pivotal scene where Rantz is summoned into the workshop of George Yeoman Pocock, the legendary shell builder who supplies boats for teams across the country. During an exchange that feels as much life lesson as pep talk, Pocock tells Rantz it is not enough to rely on his own strength. He tells Rantz to trust his teammates, explaining, “You will feel a power at work within you that is far beyond anything you’ve ever imagined. Sometimes you will feel as if you have rowed right off the planet and are rowing among the stars.”

Rantz and his teammates capture this often-elusive perfection in the final Olympic competition. Their eight-man boat draws a poor lane placement, then suffers a slow start. On top of that, their stroke, Don Hume, the rower responsible for establishing the pace communicated by the crew’s coxswain, is so ill with pneumonia that he nearly passes out. Despite this, the teammates trust each other enough to pull together, pacing themselves and rowing in perfect sync. Near the end of the race, they finally make their move —together — overtaking the Italian and German boats in the final meters to claim the gold medal.

The final race provides a satisfying climax where everyone in the boat pushes themselves to their limits, losing themselves in an Herculean undertaking and finding they are, finally, the perfect team their coach had hoped they could become. The words of Pocock, whose thoughts on racing punctuate the book, say it best: “Men as fit as you, when your everyday strength is gone, can draw on a mysterious reservoir of power far greater. Then it is that you can reach for the stars. That is the way champions are made.”