I’m gratified to know that I have something in common with Frank Sinatra, Indira Gandhi, Norman Mailer and Queen Elizabeth II, all of whom expressed a love of crossword puzzles. But it’s a mite worrisome that most of them are dead. Does the 100th anniversary of crossword puzzles also mark their impending demise?

This thought crossed my mind while I read The Crossword Century: 100 Years of Witty Wordplay, Ingenious Puzzles, and Linguistic Mischief, by Alan Connor (Gotham Books). According to Connor, the first crossword appeared in December 21, 1913, and it took about a decade for the wordplay to become widely popular. 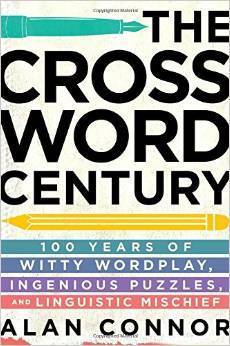 Connor treats readers to both historical information and esoteric trivia about crosswords. Chapters include a discussion of the unwritten rules of the game (“Crossword constructors may play tricks but must also play fair”), the language used in the puzzles (“Words found more often in crosswords than in real life”), and the use of crosswords in spycraft and fiction (“When puzzling meets espionage” and “Crosswords and the detective novel”). He also presents a paean to some of the best puzzles ever constructed, including one that was included in both The New York Times and in that same evening’s episode of The Simpsons: “Homer and Lisa exchange cross words.”

In one my favorite chapters, Connor discusses whether computers can crack crosswords. The smartypants machines may win at Jeopardy, but crosswords are another matter. Seems the silliness and nonsensical clues throw them for a loop. Computers aren’t so great at creating puzzles, either. Yes, they can do it. No, the resulting efforts aren’t very clever or fun.

Since the author is a Londoner, he happily dives into the odd puzzles designed by the British known as cryptic crosswords. If Yanks and Brits are indeed “two nations divided by a common language,” that seems even more true if you consider our puzzles and their English brethren.

Cryptic crosswords often feature extraordinarily long or terminally obtuse clues. Even the shorter ones can drive you mad. Consider one of the book’s examples: “Carol thus delivered girls’ beach wear (10).” Now I could look at this all year and not have a clue, but the word being sought is sunglasses — sung-lasses (Carol/girls).

Clever indeed, and I appreciated Connor’s attempts to clarify the mind-boggling intricacies of the cryptic crossword. Not, however, my cup of tea.

Finally, he faces down the issue that was bothering me: Are crosswords gone with the windblown newspapers? Connor doesn’t seem to know. But that’s okay; no one does. For now, the puzzles still exist, and happy 100th birthday to them.