The U.S. Supreme Court is considering a case where the Sarbanes-Oxley accounting law is being used to prosecute John Yates for throwing six dozen fishy pieces of evidence back into the ocean.

At first, this whale of a story catches the eye because it appears to be a fluke, an oddity and an opportunity for bad fishing puns. Why would a prosecutor use a law inspired by Enron — meant to crack down on financial fraud and document shredding — to go after a weather-beaten working man? 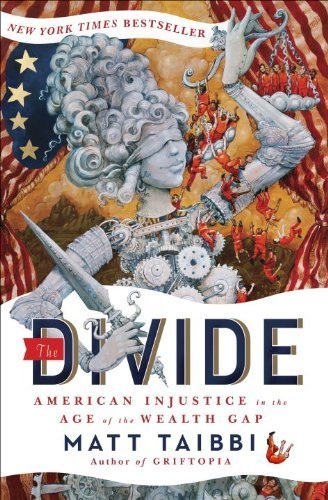 But what seems like a quirky outlier made complete sense to me because I’d just finished reading a book that provides a context and framework for this distortion of our justice system. Written by Rolling Stone political reporter Matt Taibbi, The Divide: American Injustice in the Age of the Wealth Gap provides dozens of similar stories of prosecutors going after poor people for minor crimes at the same time it lets the wealthy off with at most a company fine for gargantuan fraud.

Taibbi’s thesis is simple: the U.S. justice system is set up to reinforce the wealth gap, harassing the poor with stop-and-frisk policies that trigger big penalties and jail time for minor violations such as misrepresenting income on a welfare application or driving to work as an illegal immigrant. In the meantime, the government gives major corporations that steal millions of dollars repeated fines which are nothing but a slap on the wrist and never pursues jail time.

The most ridiculous example Taibbi gives is the day that giant bank HSBC paid a record fine — but avoided jail time or prosecution — for laundering money for Mexican cartels, Russian kleptocrats, al-Qaida benefactors and prohibited countries like Iran. On the same day, Taibbi went to a nearby courtroom and found a vagrant man arrested for sleeping on a park bench with half a joint in his pocket. He got 45 days in Rikers Island prison.

And here are the facts of the fishing fiasco. In 2007, a state conservation officer boarded Yates’ ship and discovered his catch of about 3,000 pounds of fish included 72 red groupers under the 20-inch minimum size. The officer ordered the fish brought ashore as evidence of a civil violation punishable by a fine or possible fishing license suspension.

But when the fish did not measure short on land, the government accused Yates of throwing the offending evidence overboard and replacing them with other, larger fish — a charge he denies. He was convicted in 2011 of violating Sarbanes-Oxley, which can mean up to a 20-year sentence for tampering with or destroying “any record, document or tangible object.”

The most striking similarity in The Divide was the story of Abacus, the only bank in the country to face indictment after the 2008 financial crisis caused by a plethora of bank frauds. The small Chinatown bank self-reported a case of potential misreported income on a mortgage application. Ironically, the case involved under-reporting income among people that often deal in cash and may hide their true income for tax purposes. But a local prosecutor celebrated the fact that his was the only prosecution of a bank for mortgage fraud, even perp-walking in chains nine low-level employees who didn’t speak English into the courtroom for the cameras.

In contrast, a Senate investigation found that Washington Mutual had done an internal audit of one of its most productive loan officers and found fraud (mostly over-reporting income) in 83 percent of the loans. The employee wasn’t fired; he was given a prize for loan production. No one at the bank was prosecuted.

Taibbi, best known for lobbing bombshells at big business in Rolling Stone, does not disguise his political sensibilities in his juxtapositions of justice or his tone. After all, he was the writer who tagged Goldman Sachs with the nickname “vampire squid” in the April 5, 2010, article, The Great American Bubble Machine. But his description of a harsh justice system that seems rigged to punish the poor for their poverty jibes quite closely with what a Washington Post reporter found in this article How municipalities in St. Louis County, Mo., profit from poverty.

The Divide’s stories of big business frauds being too-big-to-jail are compelling but not too surprising if anyone has followed Taibbi’s writing in Rolling Stone. What makes the reader gasp in outrage in this book are the contrasting stories of the insane harassment of the poor.

Beyond the vagrant with a joint, there is the story of Andrew Brown, handcuffed and booked for obstructing pedestrian traffic — while wearing his work uniform and talking to his neighbor on an empty sidewalk in front of his own apartment building at 1 in the morning. Or the incredible pre-emptive home searches of welfare applicants, who face jail time and red tape to clear their names for accidental overpayments, even if it was the government’s mistake.

The ultimate irony of all these stories, as Taibbi notes in the introduction, is that violent crime has been drastically decreasing since the 1990s by any way that it can be measured. Yet during this same period, the number of Americans incarcerated more than doubled to 2.2 million. The Divide tells the sad tale of how a national contempt of poverty makes this anomaly possible.

Brendan O’Shaughnessy works in communications for Notre Dame. A former teacher and Indianapolis Star journalist, he is the co-author of two children’s books about Clashmore Mike, the original Notre Dame mascot.